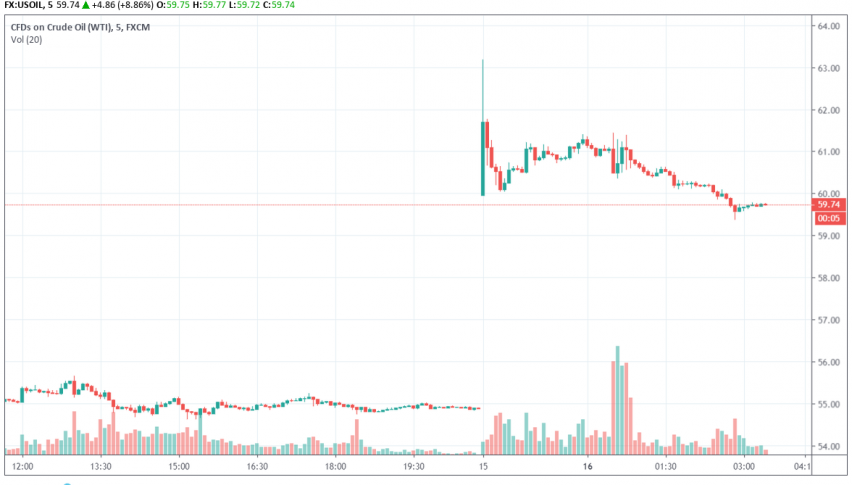 WTI crude oil prices edged slightly lower on Monday after surging by 10% over the weekend following a drone attack on Saudi’s oil facilities. At the time of writing, WTI crude oil is trading at around $59.74 per barrel.

Drone strikes on Aramco’s oil facilities at Abqaiq and Khurais disrupted around 5.7 million barrels of crude production over the weekend. The company is trying to restore a third of its production today and has not yet confirmed how long it will take for full production to resume again.

Following the news of the attack, WTI crude oil prices soared over 15% but have slipped lower early on Monday after US President Donald Trump approved the release of strategic reserves of oil from the US in the meantime. Saudi Arabia is also set to tap into its reserves to maintain oil exports at normal levels for this week.

However, crude oil continues to trade cautiously as this incident could flare up and aggravate geopolitical tensions in the Middle East again. Iran-backed Houthi rebels in Yemen have claimed that they were behind the attacks on Saturday, which has increased tensions between the US and Iran.

Arslan Butt // Index & Commodity Analyst
Arslan Butt is our Lead Commodities and Indices Analyst. Arslan is a professional market analyst and day trader. He holds an MBA in Behavioral Finance and is working towards his Ph.D. Before joining FX Leaders Arslan served as a senior analyst in a major brokerage firm. Arslan is also an experienced instructor and public speaker.
Related Articles
Crude Oil Fails to Extend Buying Trend - Increased Oil Stock Pressures!
During Thursday's Asian trading session, the WTI crude oil failed to maintain its previous day bullish trend and dropped around below the $5
18 hours ago