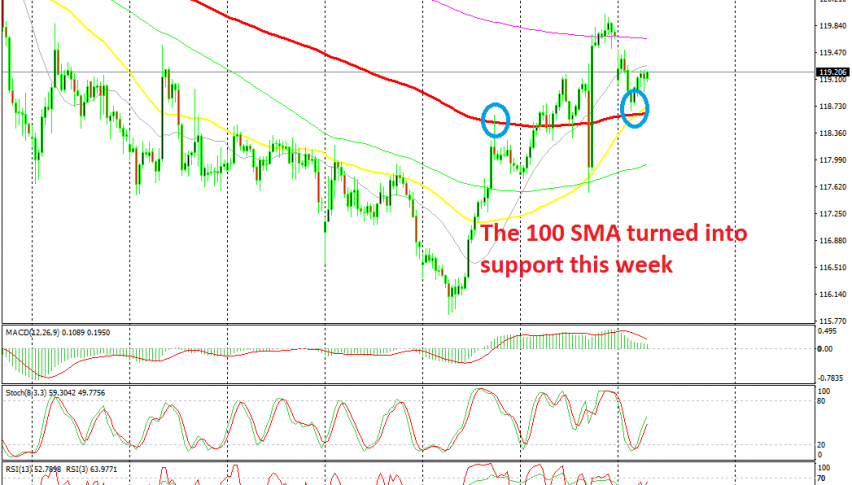 EUR/JPY Remain Bullish as MAs Turn From Resistance Into Support

The buyers are back in control in EUR/JPY

EUR/JPY has been trading on a bearish trend for more than a year. The trend picked up pace in recent months as the market sentiment deteriorated over the escalating trade war and other political and geo-political tensions. But, EUR/JPY started this month on a bullish footing.

The sentiment suddenly improved and turned strongly positive in the first week of September as China and the US softened their tones. As a result, this pair climbed around 250 pips that week from the bottom to the top. The price broke above the 50 SMA (yellow) and the 100 SMA (green) on the H4 time-frame chart.

But, the 100 smooth MA (red) stopped the surge for this pair. EUR/JPY retraced lower but the retrace ended at the first indicator, the 20 SMA (grey) which provided support. That was a strong signal that the trend had shifted from bearish to bullish on this chart.

That moving average pushed the price higher last week as it climbed, apart from on one occasion last Thursday when EUR/JPY tumbled lower after the European Central Bank cut interest rates and announced a new stimulus package, which sent safe havens higher. But, the 100 SMA (green) turned into support, aided by the 50 SMA (yellow). This was another sign that buyers were in control.

Yesterday we saw a bearish opening when the Asian session started and the price continued lower as the Euro turned bearish. But, the 100 smooth MA (red) provided solid support and today we are seeing this pair bounce higher. So, moving averages are turning from resistance into support for EUR/JPY and we plan to go long on another retrace lower.