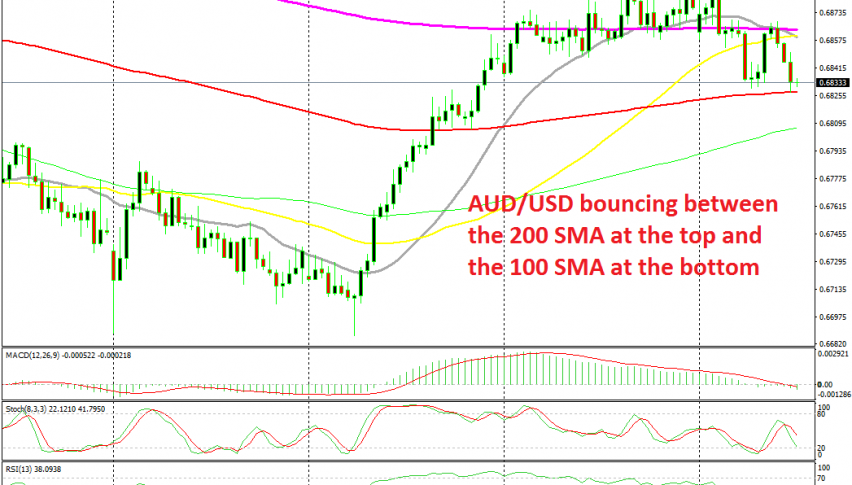 AUD/USD Bounces Between MAs as Traders Try to Decide

AUD/USD turned quite bullish in the first week of September as the sentiment improved in financial markets. Last week, the trend slowed, but moving averages were still pushing the price higher,making higher highs and lows. Although, this pair opened with a bearish gap lower this week and yesterday the price fell below the 20 SMA (grey) and the 200 SMA (purple) which were providing support during the uptrend in the previous two weeks.

The price formed a big bearish candlestick on the H4 chart during the European session as the USD started to attract some bids. AUD/USD lost some 40 pips, but the 100 SMA (red) turned into support again yesterday. The price formed a doji candlestick above the 100 SMA, which is a reversing signal after the decline and in the following session this pair turned bullish again.

But, the previous support indicators such as the 20 and the 200 SMAs turned into resistance now and the climb ended right there. Stochastic was almost overbought on this time-frame, so the price reversed down during the Asian and European session today. Although, the 100 SMA (red) is still holding on as support.

This looks like a good opportunity to buy this pair against the 100 SMA, but traders are waiting on the sidelines until the FED meeting this evening, so I don’t think this pair will make any decent moves until then. We are already long on AUD/USD, so we hope that the upside takes the upper hand.

Oil Prices Remain Supported, After the Cyberattack on US GAS Pipelines
5 hours ago