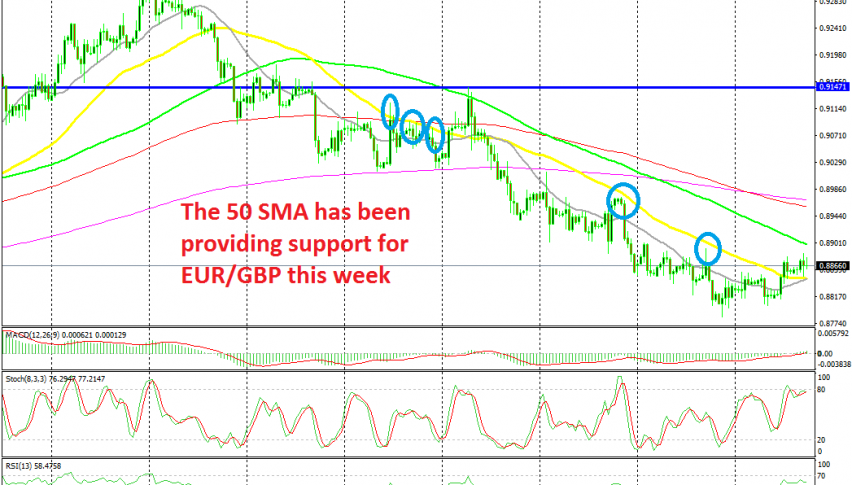 The 50 SMA Turns From Resistance Into Support for EUR/GBP

EUR/GBP has turned bullish this week

EUR/GBP has had quite a roller-coaster of a year so far in 2019. It declined from around 0.91 to below 0.85 in Q1, but it reversed higher from the area around 0.85 in May and it kept climbing to 0.9330s in August, as it became obvious that Theresa May’s brexit deal was going to fail and she was going to resign.

In August it made another reversal and EUR/GBP turned bearish. The price has been bearish since then and this pair has lost around 550 pips. Although, we are seeing a pullback higher this week and the price has moved above the 20 SMA (grey) and the 50 SMA (yellow).

These two moving averages were taking turns in providing resistance and pushing the price lower during the downtrend. But now it seems like the 50 SMA has turned into support for this pair. This moving average has supported this pair during pullbacks lower this week, the last time being earlier today.

Although, the price is returning back to the 50 SMA now as the Euro turns bearish, so we will now see if it holds or if it goes. We hope it breaks soon because we have a live sell forex signal in EUR/GBP which we opened before yesterday.