Waiting for the Pullback to End in EUR/USD, So We Can Go Short - Forex News by FX Leaders 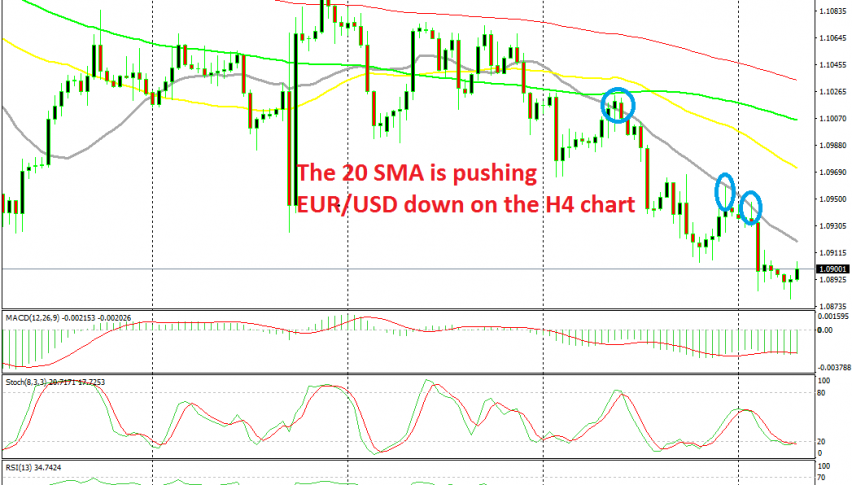 Waiting for the Pullback to End in EUR/USD, So We Can Go Short

The pressure remains to the downside for EUR/USD

The Euro has turned pretty bearish in recent months. Last week it broke the support zone at 1.0920s, while yesterday it broke below 1.09. Today the downwards pressure continued during the Asian session and this pair made new lows. The inflation report today was sort of mixed, with headline inflation ticking lower to 0.9% from 1.0%, while the opposite happened to core inflation, which ticked higher to 1.0% from 0.9%.

Although, these numbers are still pretty weak. Manufacturing continues to remain in deep contraction, as today’s final reading for September showed. The ECB has turned dovish, so there’s not much the Euro can do, apart from continuing to move down.

Although, we have seen EUR/USD retrace higher in the last few hours. The retrace is complete on the H1 chart, but this pair is still oversold on the H4 time-frame. The previous H4 candlestick closed as a pin which is a bullish reversing signal after the downtrend. The current H4 candlestick already looks bullish.

So, EUR/USD is still retracing higher on this chart and we will wait until the 20 SMA (grey) catches up. If we see another reversing pattern up there, such as a reversing candlestick, then we will be persuaded to open a sell signal. But, let’s wait and watch the price action until then.