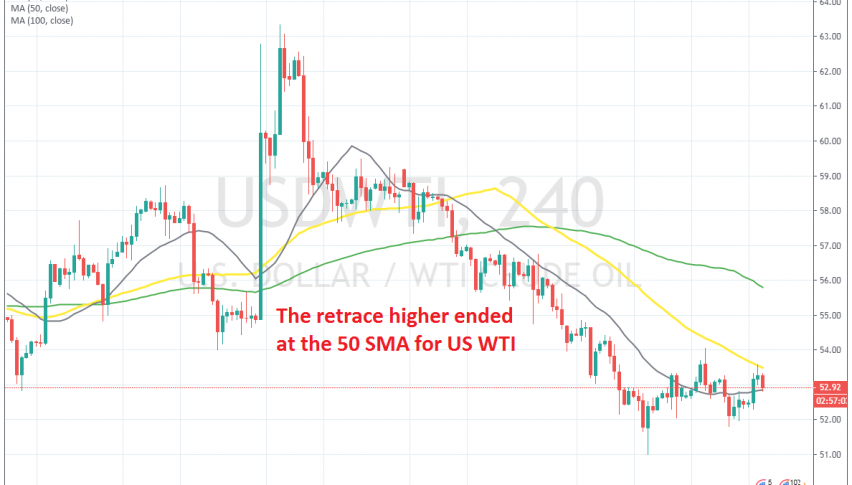 US crude Oil has formed a bearish reversing pattern

Crude Oil made a major surge by the middle of last month after the attack on Saudi Arabia Oil facilities. But the Saudis recuperated the production capacities soon and the sentiment turned to normal for Oil prices. The normal nowadays is down for crude Oil because of the ongoing trade war and the weakening global economy, which has diminished the demand for Oil.

So, US WTI crude turned bearish and has been declining for the last three weeks. But we have seen two retraces higher this week. The first took place on Monday and ended below the 50 SMA (yellow) at $54 on the H4 chart. The second took place today and it ended right at the 50 SMA at $53.50.

The price retrace higher today, but the climb stopped right at the 50 SMA,which reversed the price back down. We decided to go short on US crude after the previous candlestick closed as an upside-down hammer, which is a reversing signal. The price was overbought as well on this time-frame so we took that decision to sell.

But, the sellers are now facing the 20 SMA (grey) on the same chart. This moving average used to be resistance on the way down, but it is also working as slight support from time to time. So, if sellers want to have their way, they should push the price below the 20 SMA. I hope that they do since we have a long term sell signal here.