Forex Signals US Session Brief, Oct 18 – Markets on Standby Ahead of the Brexit Vote - Forex News by FX Leaders

Forex Signals US Session Brief, Oct 18 – Markets on Standby Ahead of the Brexit Vote

Yesterday, the UK Prime Minister Boris Johnson and the EU finally reached a deal on Brexit. That improved the sentiment further in financial markets, especially for the GBP which surged around 250 pips higher. Markets were expecting such a deal for about a week because all comments from the UK, the EU and Ireland pointed to that, but the announcement of the deal had a decent impact on markets nonetheless, because Boris Johnson has made it clear that the UK is leaving on October 31, with or without a deal.

But, the DUP Party refused the deal on an official statement they released and other UK politicians joined them. That hurt the sentiment for the GBP which lost all the gains in the following hours. Now, the uncertainty surrounding Boris Johnson’s Brexit deal has increased again and BoJo is struggling for support. Tomorrow the UK Parliament will be voting on the deal but nothing is for sure. BoJo doesn’t have a majority in the Parliament, so this can go both ways. There are quite a few options open on where Brexit can go for now, so traders are waiting on the sidelines today in order not to get caught on the wrong side. 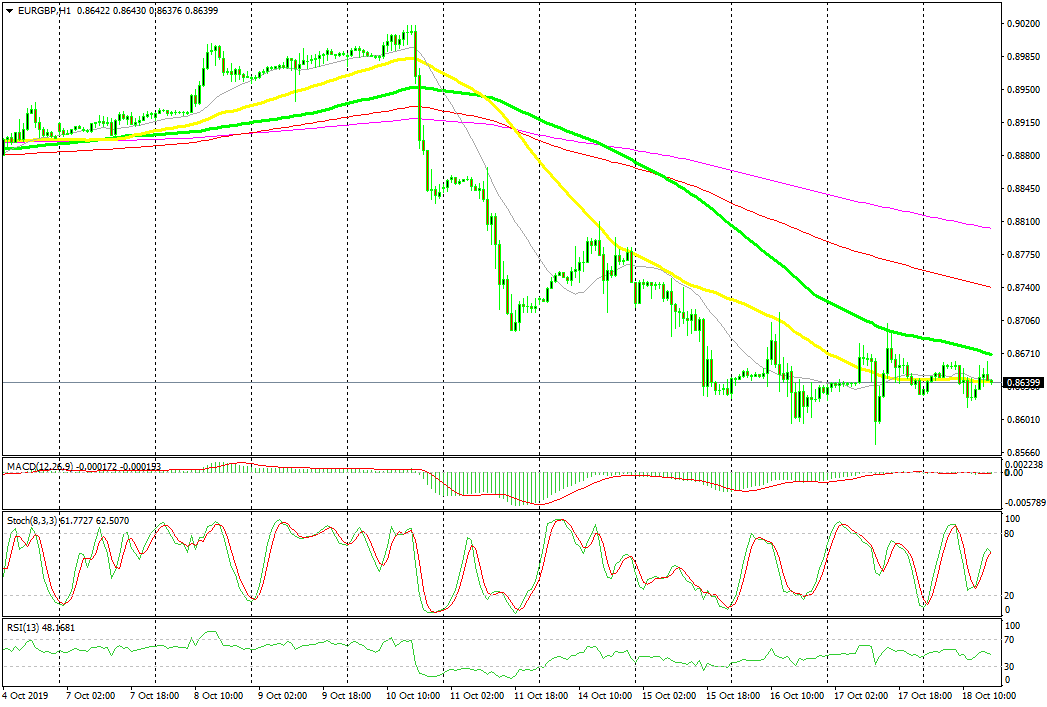 EUR/GBP has been bullish for months, but it turned bearish last week after rumours of a possible Brexit deal. The rumours are still being heard and despite the uncertainty and contradiction, the situation has improved for the GBP. The 50 SMA was doing a good job on the H1 chart, providing resistance on pullbacks higher. It was broken yesterday, although the 100 SMA (green) turned into resistance and it is reversing the price lower for the second time today. We just went short on this pair, after the last two candlesticks closed as a doji and an upside-down hammer, which are reversing signals.

The sentiment in financial markets today is neither positive nor negative, showing the uncertainty ahead of the parliamentary vote tomorrow on Brexit. The price action is very slow, although, the only trend today is the slight softness in the USD.