Will EUR/USD Break the 100 SMA or Reverse Back Down? - Forex News by FX Leaders 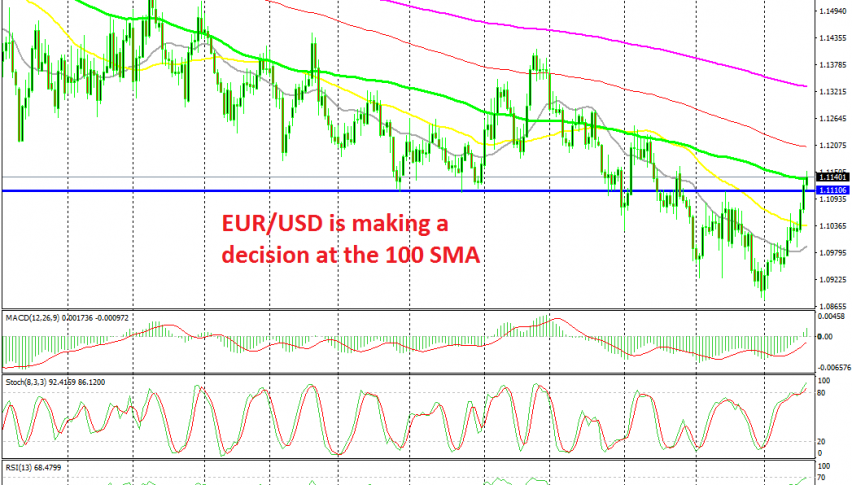 Will EUR/USD Break the 100 SMA or Reverse Back Down?

EUR/USD has been bearish since Q1 of last year and has lost more than 15 cents from the top to the bottom. The decline continued until the very end of last month, as the global and the Eurozone economies continued to weaken. But, the US economy also started weakening considerably in recent months and this month’s ISM manufacturing report showed that this sector fell deeper in contraction.

As a result, the USD turned bearish this month and EUR/USD turned higher. The partial trade deal between US and China also helped the sentiment for this pair, but the Brexit deal has done the biggest part in this climb for this pair, pushing this pair above the 20 SMA (grey) last Thursday.

The price traded sideways for a couple of days below the 50 SMA (yellow), but the bullish trend resumed on Wednesday. The price reached the 100 SMA (green) today and it pierced it, but it’s still trading pretty close to it. EUR/USD has pierced this moving average several times before but has reversed back down again.

This might be the case again today, since stochastic is overbought on the daily chart. But that will depend on the Brexit vote tomorrow at the British parliament. If the deal passes, then it’s likely to see this pair open with a bullish gap higher on Monday, which will confirm the break. If not, then we might see a bearish gap on Monday.