What is Behind the Bullish Rally in Japan’s Nikkei Lately? - Forex News by FX Leaders 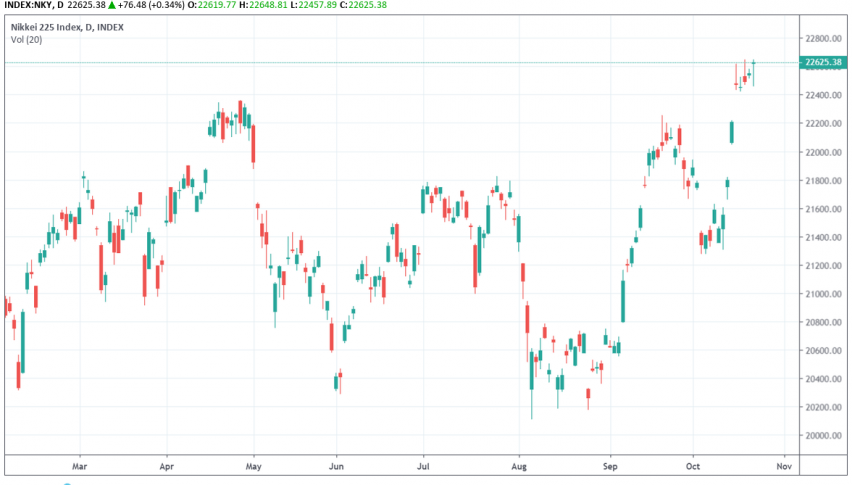 What is Behind the Bullish Rally in Japan’s Nikkei Lately?

On Thursday, Japan’s leading stock market index Nikkei soared to its highest level so far this year as a result of optimism in the third quarter corporate earnings. At the time of writing, NIKKEI225 has edged lower to trade around 22625 after having soared to 22750 during today’s Asian session.

Japan’s stock index has gained around 13% till date in 2019 after experiencing four consecutive days of bullish trading. A higher than expected sales forecasts for Microsoft’s cloud services stoked optimism and boosted buying in Japanese tech stocks. Expectations for increased demand for technologies like AI and big data drove shares of Japanese semiconductor companies higher, driving the recent rally in Nikkei.

In addition, the improved sentiment on rising hopes for a US-China trade deal lately have also supported Nikkei’s bullishness. When the market sentiment improves, the demand for safe haven currencies like the Japanese yen diminishes. The weakening of the currency benefits the economy, which is especially relevant for Japan as it is an export-reliant economy. The Nikkei’s recent surge can be attributed to the weakening in the Japanese yen, which has helped drive profits higher for Japanese export companies.

Stock Signal in Profit as Google Eyes 3,000, After Earnings Beat Estimates
4 weeks ago