Is NZD/USD Going to Keep the Uptrend Going? - Forex News by FX Leaders 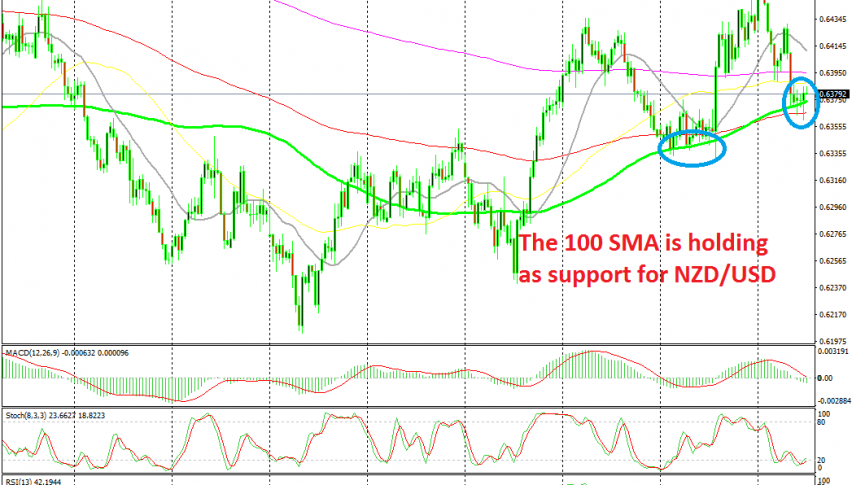 Is NZD/USD Going to Keep the Uptrend Going?

NZD/USD has been on a bearish trend for a long time and in summer the trend picked up further pace, taking this pair down to 0.62. But the sentiment improved in October and NZD/USD reversed higher. This pair climbed more than 250 pips from the bottom to the top, but the climb stopped right at the 100 SMA on the daily chart.

As this pair turned bullish, the price moved above moving averages on the H4 chart. Moving averages were providing resistance when this pair was bearish, but now they seem to have turned into support for this pair, the 100 SMA (green) in particular.

In the last week of October we saw NZD/USD retrace lower but the 100 SMA held the decline and the price reversed higher eventually off that moving average, making new highs. This week we are seeing another pullback down as the USD attracts some bids, especially after the US ISM non-manufacturing report which came out pretty strong yesterday.

But, the decline has stopped right at the 100 SMA once again. Could we witness another bounce off this moving average? Perhaps, but the situation is a bit more complicated now that the FED is done with rate hikes for the time being. If the price is to bounce from here, this would be a good opportunity to go long on NZD/USD with a stop below this week’s low and a TP target at previous highs.

Crude Oil Starts to Reverse Back Up, After the Decline Yesterday
10 hours ago