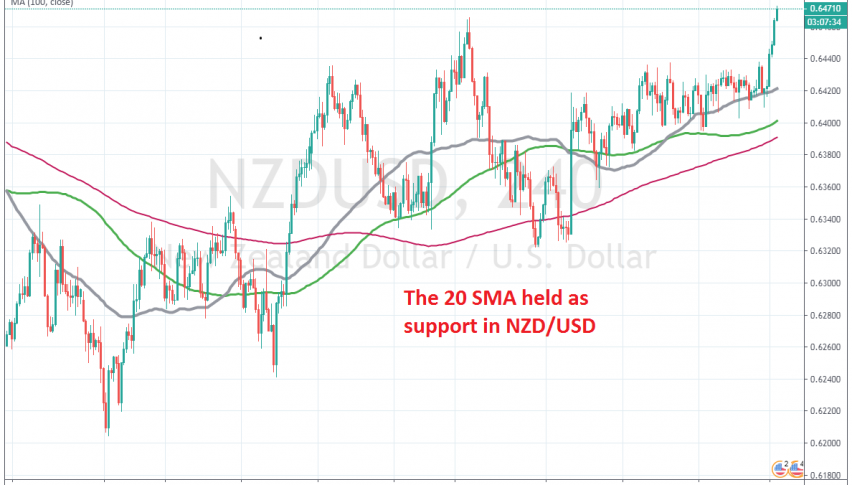 NZD/USD has been on a bullish trend since early October when it reversed from a long term bearish trend. The sentiment in financial markets improved, on comments that a partial deal between US and China would be reached soon, which helped risk assets such as the Kiwi climb higher.

The sentiment has switched on and off many times in the last two months, which has turned the Aussie bearish a few times. But, NZD/USD has remained pretty bullish and has stretched the upside whenever it has found the opportunity.

Moving averages have been doing a good job in providing support during pullbacks, particularly the 20 SMA (grey), which held this pair bullish throughout last week. Markets were trying to make a decision at the end of last week, as November ended and we saw some strange cash flows on Friday, amid this liquidity, since the US was on a long weekend.

Over the weekend though, the economic data came out pretty positive for the Kiwi. The New Zealand overseas trade index beat expectations early last night, while Chinese manufacturing PMI increased by nearly a point, leaving behind contraction, after being there for several months.

Services PMI also improved, which helped turn the sentiment positive in forex. NZD/USD jumped off the 20 SMA (grey) on the H4 chart as a result, so the buyers are in control again. We will wait for a retrace lower on this chart in order to go long on this pair.

USD/JPY On The Bull To Open June
1 hour ago

EUR/CHF Heads For the 200 SMA, As the Bullish Momentum Continues
3 hours ago
Comments