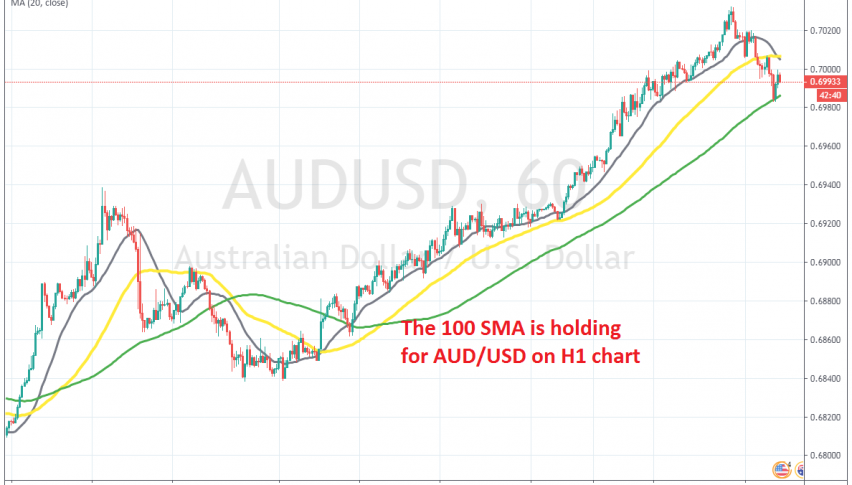 Buying the Retrace in AUD/USD at the 100 SMA

The pullback is complete now on this chart

AUD/USD has been bullish since the beginning of this month, as the USD turned bearish, on softer US ISM manufacturing report, which showed that this sector fell deeper into contraction during November. The upside momentum faded and in the third week this pair retraced lower.

But, the sentiment improved further after US and China agreed on Phase One deal, helping risk assets, such as the stock markets and commodity Dollars. Last week, the USD tumbled lower ahead of the new year and as a result, AUD/USD turned even more bullish for about a week.

Today though, we are seeing a pullback down in this pair, as USD finds some bids at last. But,t he 100 SMA (green) held the decline on the H1 chart and this pair bounced off that moving average earlier. The price is not exactly running away after the bounce, which has given us some time to open a buy signal now, hoping that the uptrend will resume soon.

We saw another test of the 100 SMA earlier today, but that moving held once again as support, which is a good sign. The price has bounced off the 100 SMA, but now it faces the 20 SMA (grey) and the 50 SMA (yellow) as resistance. If AUD/USD climbs above those two moving averages, then the uptrend will be intact again.

Check out our free forex signals
Follow the top economic events on FX Leaders economic calendar
Trade better, discover more Forex Trading Strategies
Related Articles
AUD/USD Facing A Big Test at the 20 Weekly SMA
AUD/USD has been bullish since early October although buyers are having trouble pushing the price above the 200 weekly SMA
2 hours ago