As we know, a US drone delivered a strike on Thursday night, killing the top Iranian military leader Soleimani. The sentiment turned negative immediately after that, as fears of another war in the Middle East increased. Risk assets tumbled lower, while safe havens such as GOLD surged higher.

Iran threatened to retaliate against the US on this, while Donald Trump threatened back with more action if Iran attacks US targets. The back and forth comments have been going on since then. Trump continued with retaliation rhetoric yesterday in his Twitter account. 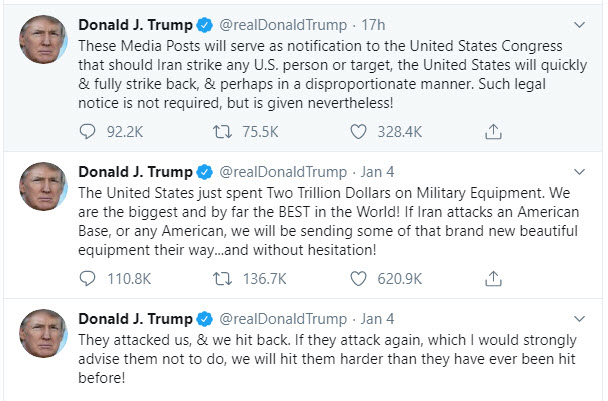 Although, we also heard some comments from the US about de-escalating the conflict. A while ago, Trump’s adviser Kellyanne Conway was speaking and said that President Trump is confident he can still renegotiate a nuclear deal with Iran.

That seems a bit far fetched right now, but it’s keeping markets uncertain what direction this issue will take. Gold has been trading sideways as a result, while risk currencies have recuperated a little, but I don’t think Iran will leave it at this. So, we have to follow closely for any comments which will push markets up or down.

Gold’s Bullish Bias Dominates - Why $1,845 Could Drive Uptrend
30 mins ago