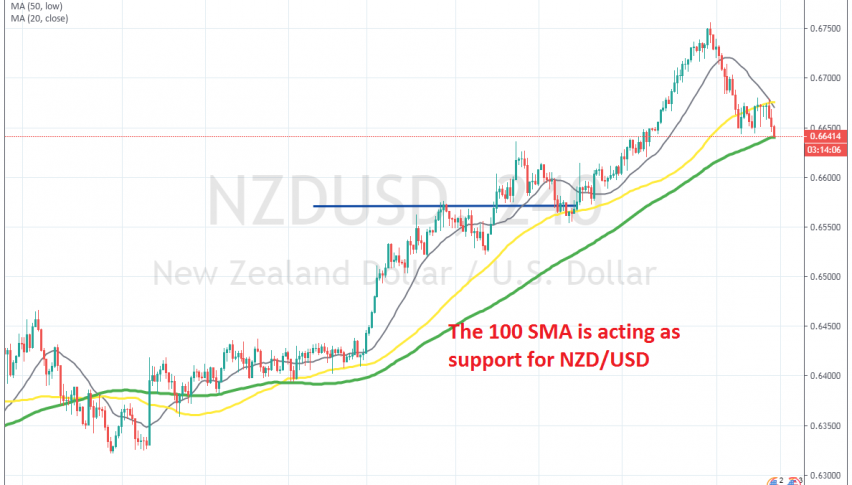 Buying the Pullback in NZD/USD at the 100 SMA

The pullback is complete on the H4 chart now

NZD/USD has been quite bullish since early October when the prospects for a partial trade deal between US and China arose. The sentiment improved, which turned risk currencies bullish and the NZD benefited the most from it. December was particularly good for NZD/USD, with this pair climbing around 400 pips.

The agreement on the Phase one deal at the beginning of December turned the sentiment even more bullish for risk assets and at the end of the month, the year-end cash flows were going against the USD, which pushed NZD/USD even higher.

Once the year ended and the cash flows ran out, the USD started attracting some bids. NZD/USD has given back some of the gains, although this looks more like a retrace down. So, we decided to open a buy signal in this pair, since it is finding support at the 100 SMA (green) on the H4 chart. On the daily chart, it’s the 200 SMA which is providing support. The retrace down is complete now, so let’s see if buyers will get active from here.

Gold Breaks Above the 200 Daily SMA, As It Pushes to $1,800
4 days ago
AUD/USD Facing A Big Test at the 20 Weekly SMA
AUD/USD has been bullish since early October although buyers are having trouble pushing the price above the 200 weekly SMA
1 week ago