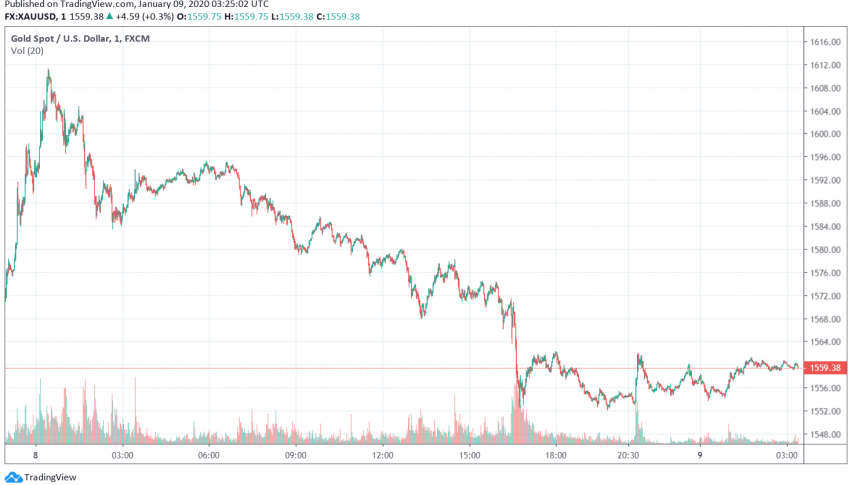 Gold Eases Back Below $1,600 as Markets Seem Less Worried About US-Iran Conflict

Early on Thursday, gold prices have eased off from multi-year highs above $1,600 over rising expectations for a de-escalation in US-Iran tensions. At the time of writing, GOLD is trading at a little above $1,559.

On Wednesday, gold had soared to the highest levels in almost seven years, crossing the key $1,600 mark, after Iran launched missile attacks against Iraqi military bases housing US troops. Markets remained tensed in anticipation of possible flare-up of geopolitical tensions in the Middle East.

However, gold prices calmed down after US President Donald Trump’s speech which indicated that all was well and that the US was considering economic sanctions instead of further attacks against Iran. In times of geopolitical uncertainties, the safe haven appeal of gold rises as it is considered a reliable instrument to invest in.

Analysts expect the precious metal to continue trading between $1,550 and $1,600 for the time being on the back of minor profit-taking by traders. Later this week, the focus is likely to shift on economic data from the US which will likely move gold prices.

EUR/USD and Gold Testing the 50 MA As Support, After the Retreat on US Q4 GDP
12 hours ago