WTI Crude Oil Dropped Amid Intensifying Optimism Around US and Iran

Today in the early Asian session, WTI crude oil prices were still flashing red and continued to drop to hit the first weekly loss since November, mainly due to decreasing conflict between the United States and Iran.

The US House of Representatives voted overnight to curb US President Donald Trump’s power to strike Iran. Meanwhile, in comments to Fox News, Vice President Mike Pence said that the Islamic Republic had asked militias in the Middle East not to carry out attacks against US interests.

In addition, a statement from China’s Vice Premier Liu He, head of the country’s negotiation team in China-US trade talks, said that he is set to visit Washington next week to sign a trade deal with the US.

In more positive news, US President Trump had previously said that the deal would be signed at the White House on January 15. Under the agreement, which was announced in December, the US stopped plans for new tariffs on Chinese imports and decreased some existing duties, while in return, Beijing agreed to increase agricultural purchases. 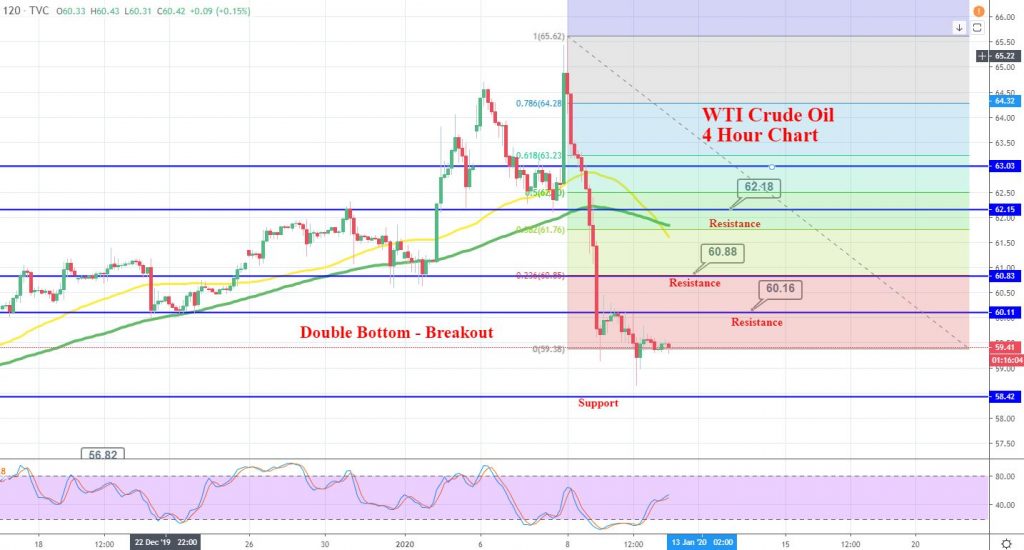 Technically, crude oil is holding below a strong resistance level of 60.11 as below this, oil prices can dip further until 59.35. Whereas, the violation of 59.35 can cause further dip until 58.45 in oil prices.

Besides, the bullish breakout of 59.35 can lead to oil prices higher towards 60.85. Let’s stay bearish below 60.15 and bullish above the same level today. Good luck!

Selling Crude Oil Again, As the Pressure Remain to the Downside
1 day ago