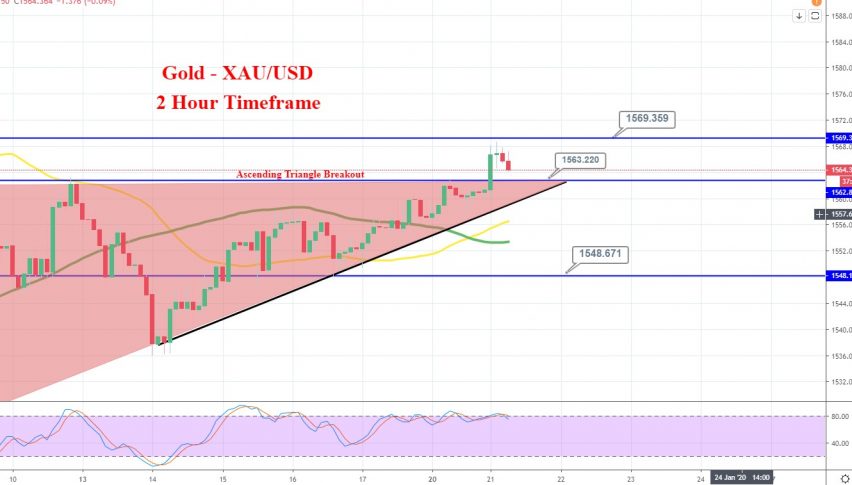 The market is trading with a risk-off sentiment due to China’s coronavirus news. GOLD prices closed at $1560.500 after placing a high of $1562.760 and a low of $1555.830. Overall the movement of gold remained bullish throughout the day.

A day prior, gold prices rose and hit a more than one-week high on the back of escalating tensions in the Middle East and the impeachment proceedings against US President Donald Trump.

On Saturday, the Iran-backed Houthi militia attacked a mosque in Yemen with a missile and drone attack. More than 100 people were killed, and dozens were wounded in that attack. The attack was made after a month of calm in the war between Iran-backed Houthis and the internationally recognized government of Yemen supported by Saudi Arabia & UAE.

After this news, the disruptive developments in Middle-East again got traction when in Libya, the military forces loyal to Khalifa Haftar closed a pipeline that connected Libya’s largest & second largest oilfields with the coast. The closure risked cutting off nearly all the country’s output of oil as international leaders were meeting in Berlin for a peace summit on Libya.

On the other hand, in Washington, the President of the United States, Donald Trump, offered his first comprehensive defense before his impeachment trial was set to start in the Senate on Tuesday. Trump’s lawyers argued that the impeachment case against him was “flimsy” and a “dangerous perversion of the constitution.” The brief of White House also claimed that the impeachment process has been a “charade” and that Trump did nothing wrong in dealing with Ukraine.

The US senators disagreed over the need for key witnesses to appear at the impeachment trial of Donald Trump. On Tuesday, the main proceeding will start to decide whether the president should be removed from office.

However, both headlines failed to give a significant move to gold prices in financial markets on Monday as there was a holiday in the United States due to Martin Luther King Jr. Day. The low volume of traders due to closed US markets lightened the effect on gold prices.

The US Federal Reserve will hold its first policy meeting of the year later this month, and traders will be keeping an eye on it for further investment. The Fed has already cut its interest rates three times last year, and the market has no expectations for another cut this month. 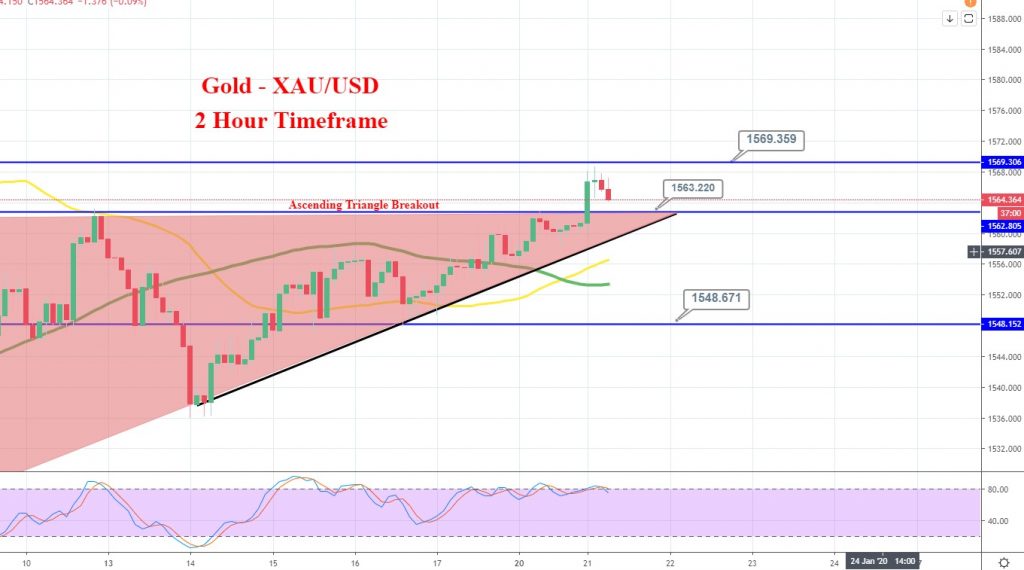 The precious metal gold soared to trade higher around 1,566 levels in the wake of risk-off sentiment. Investors seem to fear and invest in safe-haven assets following China’s coronavirus news. Gold has violated the ascending triangle pattern at 1,563, and it may surge higher to target 1,569 level. The metal may find immediate support around 1,563 level today while the resistance stays at 1,569 and 1,574.