Manufacturing improved in Euroe and the US this month

The economy of the Eurozone slowed down a great deal last year and the European Central Bank turned dovish, cutting deposit rated further in negative territory and restarting another QE programme. All other major central banks turned dovish last year, cutting interest rates several times and now the Bank of England is expected to cut rates again. Although, we have seen some green shots from the Eurozone and the UK recently, such as the manufacturing and services reports today, but markets don’t seem impressed and EUR/UD and GBP/USD have slipped lower yet.

Manufacturing improved in Germany and the Eurozone this month, although it remains in deep contraction. Services would have improved as well for the whole of the Eurozone, but they declined in France due to the ongoing protests, which affected the Eurozone services PMI negatively. Inflation has also improved and stabilized at around 1.3%, but that’s still too low and the ECB seems pessimistic about it, as Lagarde suggested earlier today. So, the Euro continues to remain bearish. Services improved considerably in the UK, jumping to 52.9 points from contraction and this sector makes up about 80% of the UK economy, which is a good sign. But, markets are stil pricing in a rate cut from the BOE soon, so the GBP turned bearish after that report. 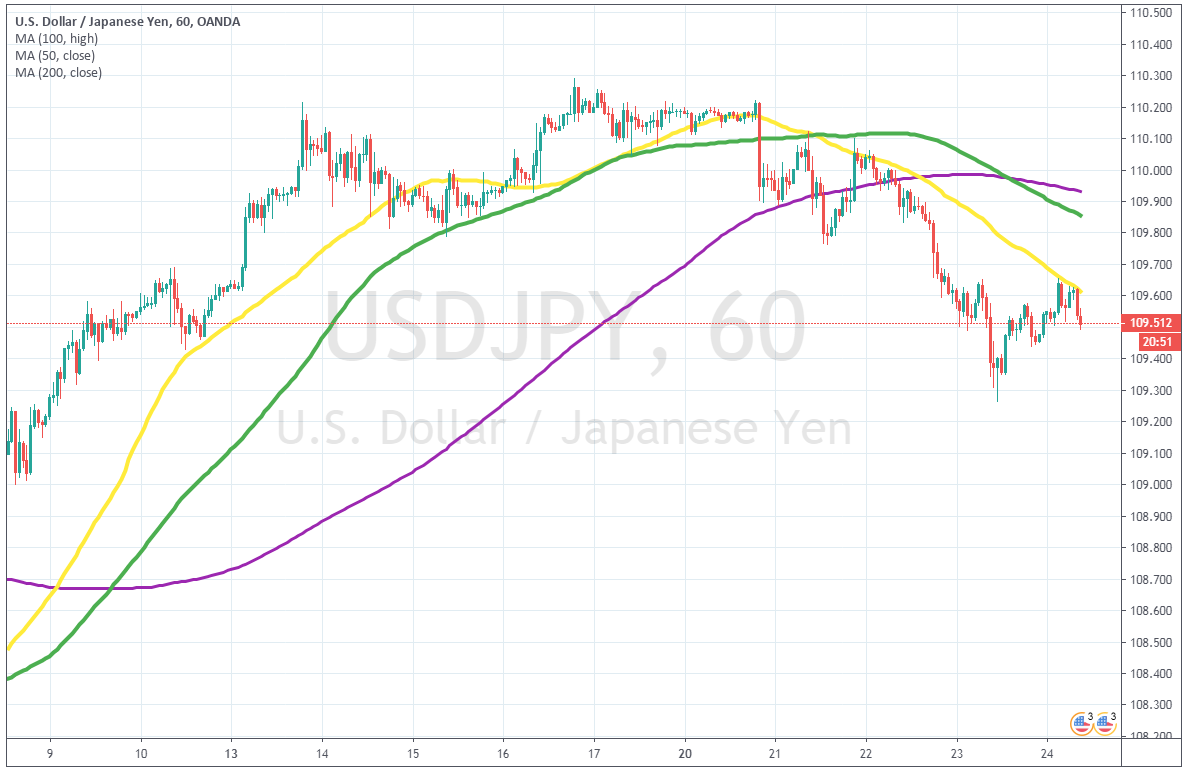 USD/JPY turned quite bearish in the last few days of last year, as traders turned into safe havens just in case a world war broke out. Well, that wasn’t too far fetched, as geopolitical tensions between US and Iran increased in the first week of this year and safe havens rallied higher, with USD/JPY losing around 200 pips in total. But, the sentiment improved after the US didn’t attack back, following the Iranian attack on US bases in Iraq. As a result, safe havens turned bearish again and USD/JPY turned bullish, climbing above 110. But, the sentiment turned negative again this week, after the coronavirus outbreak in China.

As a result, USD/JPY has turned bearish again, as safe havens attract bids. USD/JPY fell to 109.20s, but it was retracing higher yesterday. Although, buyers couldn’t push above the 50 SMA (yellow) on the H1 chart, which has been providing resistance since yesterday. They failed to push above it, and instead the 50 SMA pushed the price down. The virus is still strong in China, so I suppose the sentiment will remain negative and USD/JPY will remain bearish.

Buying EUR/USD at the 50 SMA, As US Services and Manufacturing Improve
2 weeks ago

Can GBP/USD Resume the Bullish Trend Going After the PMI Reports?
2 weeks ago