Tensions are brewing up again in the Middle East

As we know now, the Corona-virus is getting everyone scared and the sentiment has been pretty negative in the last couple of weeks. Risk assets such as stock markets have turned bearish, while safe havens such as Gold and the JPY have turned bullish. Yesterday the risk mod wasn’t as bad, although it still remained negative and the decline in risk assets kept sliding lower. Today, markets seems more balanced, although that’s due to the uncertainty form the corona-virus which will likely hurt the Chinese economy, as Chinese economists suggested, the global economy and the FED, which will be meeting this evening.

The FED is expected to stay on hold again this month, although we some participants/economists see another interest rate cut this year, but it won’t be today. We also saw a jump in crude Oil a while ago, after reports of a Houthi missile attack on Saudi Arabia’s Aramco facilities. But, the uncertainty prevailed over that and crude Oil is turning bearish again now. The earnings reports from US companies are being released today and Boeing disappointed by announcing cuts to its 787 production rate; pre-market shares were dragged lower as a result. 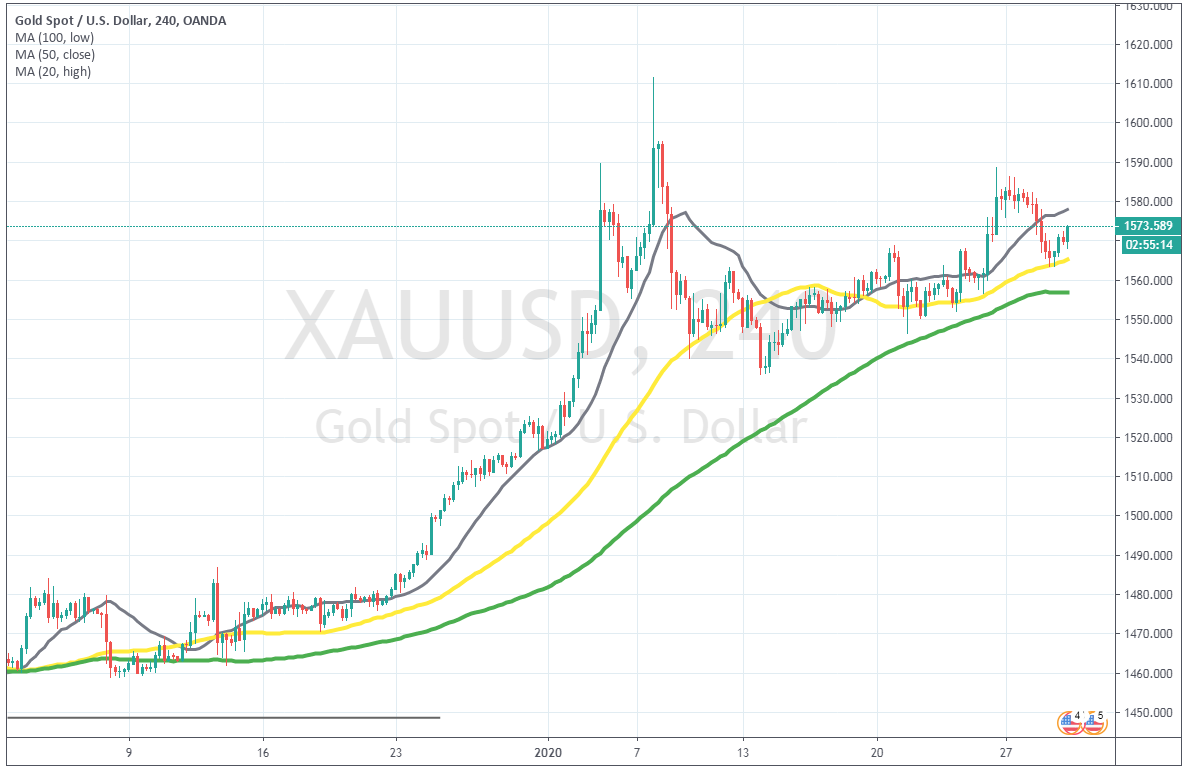 The pullback lower is complete now

Gold has been mostly bullish in 2019 as the sentiment has been mainly negative, due to an escalating trade war and a slowing global economy. This year the bullish trend resumed again and we saw some major moves to the upside, especially as tensions between US and Iran increased in the Middle East. Tensions decreased after the US didn’t follow through after Iran’s attack on US military bases in Iraq. As a result, Gold retreated lower, but it still remained above the 100 SMA (green) on the H4 chart and once that moving average approached close enough, buyers became confident and the upside momentum resumed again.

The outbreak of the corona-virus in China turned the sentiment negative again in financial markets and fear turned the attention to safe havens again. As a result, Gold turned bullish again and this time the 50 SMA (yellow)turned into support on this time-frame. Yesterday we saw a retrace lower, but the 50 SMA held well and today the price is moving higher again. So, Gold is pretty bullish and will remain so as long as the corona-virus fears remain. Therefore, retraces lower are good opportunities to buy Gold.

Today the sentiment is not as bad as in the last couple of weeks, so the decline in risk assets is not as big, but it remains slightly negative. The uncertainty is also pretty high, while the FED will hold its meeting in the evening, so traders are a bit on standby.

EUR/USD Down the Slippery Slope Despite ECB Reminding Us High Inflation
9 hours ago
EUR/USD Facing the 200 SMA As Sentiment Remains Negative
We have turned bearish in EUR/USD as the bullish pressure fading and the price heading for 1.07 now
1 day ago