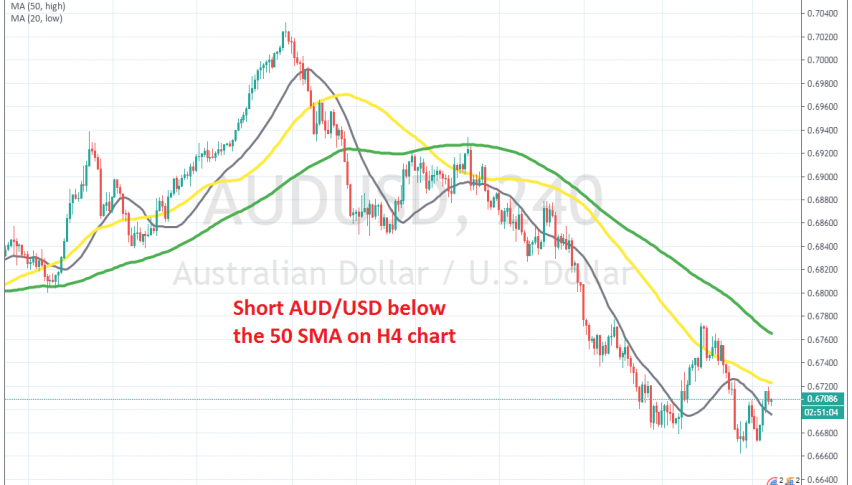 Shorting AUD/USD at the 20 SMA

The 50 SMA is acting as resistance again

AUD/USD was pretty bullish throughout December, as the USD had a bad month back then, after US ISM manufacturing dipped further in contraction. The year end cash flows which went against the USD as well also helped this pair climb higher towards the end of the year.

But, the sentiment reversed in the first week of January after the tensions between US and Iran and risk assets such as Commodity Dollars turned bearish. The sentiment turned even more negative after the coronavirus outbreak in China, which has been keeping AUD/USD bearish.

Moving averages have turned from support into resistance, with the 100 SMA (green) providing resistance during pullbacks at first, then the 50 SMA (yellow) and 20 SMA (grey) took things on their hands. In the last two days, we have seen a retrace higher, but that ended just below the 50 SMA, as seen on the H4 chart above. So, this pair remains pretty bearish, despite the pullback higher, which is a good opportunity to go short.

Check out our free forex signals
Follow the top economic events on FX Leaders economic calendar
Trade better, discover more Forex Trading Strategies
Related Articles
AUD/USD Looking Bearish After the RBA
AUD/USD has made a strong bearish reversal despite increasing inflation in Australia, but sellers are facing the 50 daily SMA now
20 hours ago
AUD/USD Coming Off the Highs After 2022 Inflation Surge, As Risk Sentiment Abates
Overnight we had the CPI consumer inflation report from Australia, with AUD/USD being on a bullish trend for a few months
2 weeks ago