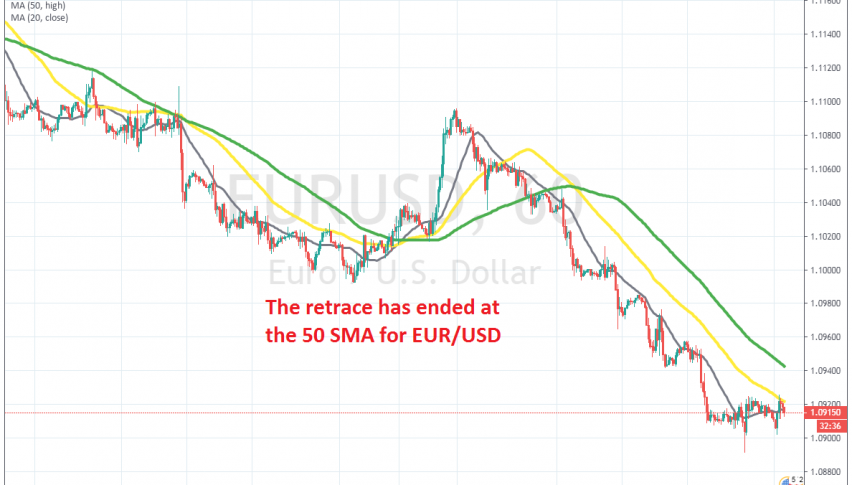 Shorting the Retrace in EUR/USD at the 50 SMA

The pullback has ended at the 50 SMA on H1 chart

EUR/USD used to be pretty bullish in December, as the sentiment improved due to Phase One deal between US and China, while the US ISM manufacturing fell deeper in contraction, which sent USD lower. But, the situation reversed immediately once the new year started and this pair has been bearish since then.

Tensions in the Middle East, as well as coronavirus, are keeping the sentiment negative, sending risk assets lower. Although, the sentiment has improved somewhat this week, despite new cases coming up, sending the total number towards 50k.

As a result, risk currencies such as Commodity Dollars have retraced higher, but the main trend still remains bearish. During the decline, moving averages have turned into resistance for this pair on the H1 chart, pushing it lower. Last week, the downtrend picked up pace and the smaller period MAs such as the 20 SMA (grey) turned into resistance.

But, the price has moved above it today, as the pair retraces higher, although the 50 SMA (yellow) has stopped the climb, so we decided to take a shot and open a sell forex signal here. Mow, let’s see when the next wave of panic hits the markets, which would send this pair down again.

Bitcoin (BTC), Ripple (XRP) Down To Open Week
15 hours ago