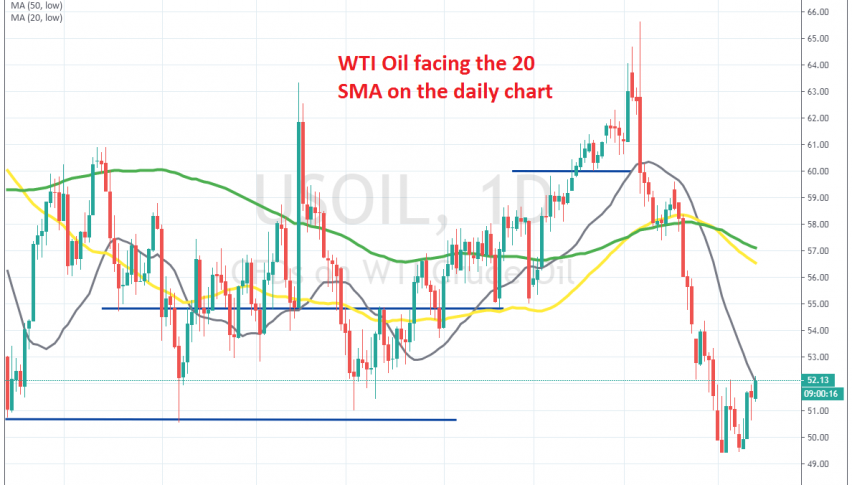 Crude Oil Facing the 20 SMA on the Daily Chart, After Reversing Higher

Crude Oil was really bullish in December, after OPEC+ decided to cut production again, by placing quotas for 50k barrels/day. WTI crude surged above $65, helped by the tensions between US and Iran in the first week of this year. But, the climb ended right there.

In the second week of January, we saw a swift reversal and the trend has been bearish since then. The reason for this was the reversal in the sentiment, as coronavirus broke out, turning the sentiment negative in financial markets. As a result, risk assets such as Crude Oil turned really bearish.

WTI crude lost more than $16 from top to bottom, breaking below the major support zone around the big round level at $50. The price climbed back above it last week, but turned below that major support zone again. But, it didn’t make new lows, which was a sign that sellers were losing steam.

OPEC is looking to cut production again, this time by a massive 600k barrls/day, which has improved the sentiment for Crude Oil. But, Russia is still trying to make up its mind on the issue, so it’s not certain that OPEC+ will cut again. But, that has been enough for buyers to push the price around $3 higher.

Although, WTI Oil is facing the 20 SMA (grey) on the daily chart now. So, we will see if buyers will have enough strength to break this moving average; but this might also be a good place to go short, if OPEC+ doesn’t reach an agreement to cut production soon.

Selling Crude Oil Again, As the Pressure Remain to the Downside
6 days ago