Uncertainty is obvious in markets today

The panic from the coronavirus outbreak has abated now, as it seems to be under control outside of China, at least. In China, the virus continues to spread, but the pace of spreading has slowed down, which has improved the sentiment. Although, the Chinese economy is surely going to suffer, as most major names in the industry have revised economic growth forecasts in China for 2020. So, traders have been uncertain what direction to take today in forex.

Although, there was some price action nonetheless. USD/JPY resumed the bullish trend today and has climbed around 70 pips so far, as JPY’s appeal as safe haven diminishes, with the sentiment less negative now than a month ago. Risk currencies also retraced higher during the Asian session today, but the climb has stopped there. On the other hand, Gold is still attracting bids. Gold is more than $40 higher today, despite the improvement in the sentiment, climbing to the highest levels since 2013. So, there are mixed feeling out there today and there’s no real direction in forex. The UK inflation report showed a jump in December, but the GBP is has given back the gains from that report now. 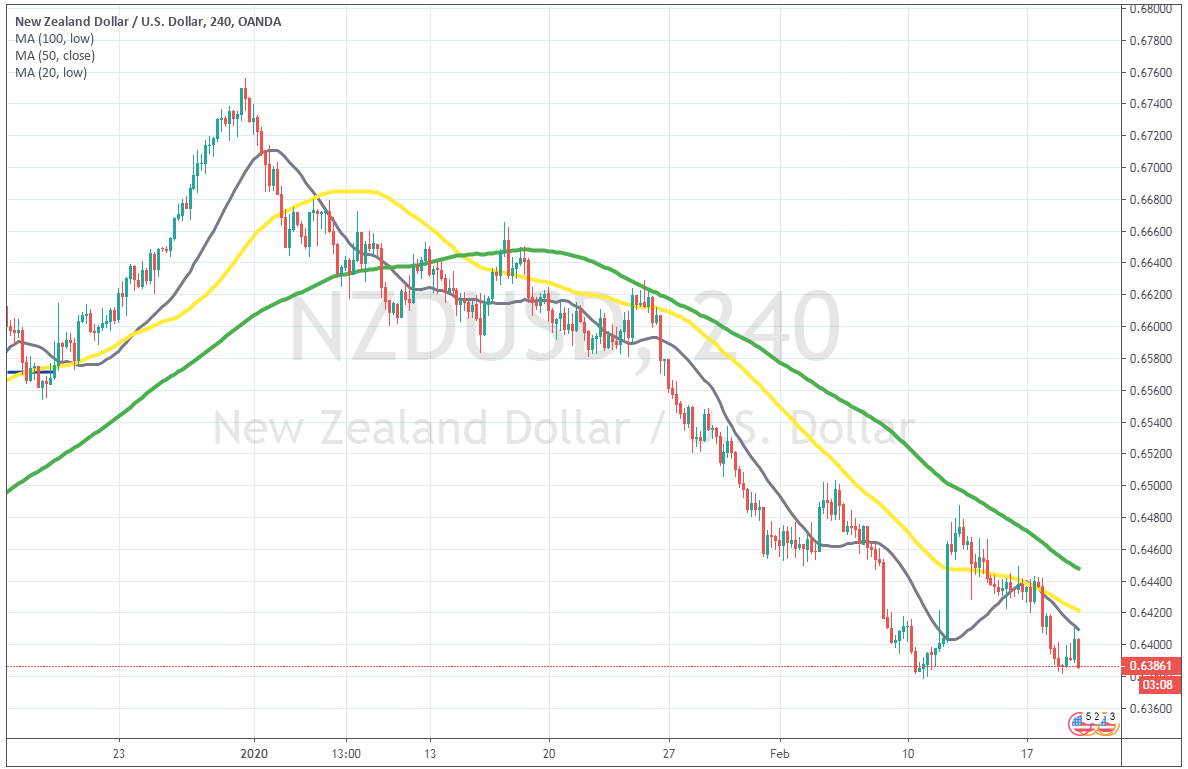 NZD/USD turned bearish at the beginning of this year, after having retraced higher in the last three months of last year. But, good times ended with the end of Q4 in 2019 and once the new year began, the retrace higher ended and the price turned bearish. NZD/USD has remained bearish since then, losing nearly 400 pips, as the tensions between US and Iran at first, then the coronavirus epidemic hurt the sentiment in financial markets. During this time, moving averages have turned into resistance and have reversed the price lower many times.

Last week, we saw the price retrace higher, but buyers gave up below 0.65 twice. Rhe 100 SMA (green) also helped reverse the price down in the second occasion, as it was approaching. Today we saw another pullback higher, but the retrace ended at the 20 SMA (grey) this time. So, buyers continue to remain in charge on this pair as well, so pullbacks higher offer good opportunities to sell.

The sentiment improved earlier today, especially during the Asian session and risk currencies retraced higher, while the JPY declined, sending USD/JPY higher. On the other hand, Gold has been climbing and now the sentiment has turned negative again, with risk currencies turning bearish.

USD/JPY Reversing Down at the 100 SMA, After Higher Inflation Numbers from Japan
2 weeks ago
AUD/USD Coming Off the Highs After 2022 Inflation Surge, As Risk Sentiment Abates
Overnight we had the CPI consumer inflation report from Australia, with AUD/USD being on a bullish trend for a few months
2 weeks ago