It's Been A Whipsaw Session For Gold Bullion.

The coronavirus outbreak has been driving markets around since mid January. markets almost panicked last month, with risk assets such as crude Oil diving lower. But, as the pace of spread slowed the sentiment improved somewhat, but traders still remain pretty cautious. It seems like the virus outbreak is stabilizing in China, as the pace of spreading falls, although, no one really knows for sure what’s going on in China. Today though, fears increased again, as coronavirus cases in South Korea nearly doubled, which is the fastest spread outside of China.

As a result, there was a bit of panic early today and Gold surged higher for another day. Gold is up nearly $30 today, as traders turn to this safe haven before the weekend, just in case there is a jump in coronavirus cases over the weekend. We also had the service and manufacturing data being released from Europe today. Manufacturing showed some improvement,although it still remain in contraction, while services have finally stabilized and contraction seems far now for this sector, both in the Eurozone and the UK. 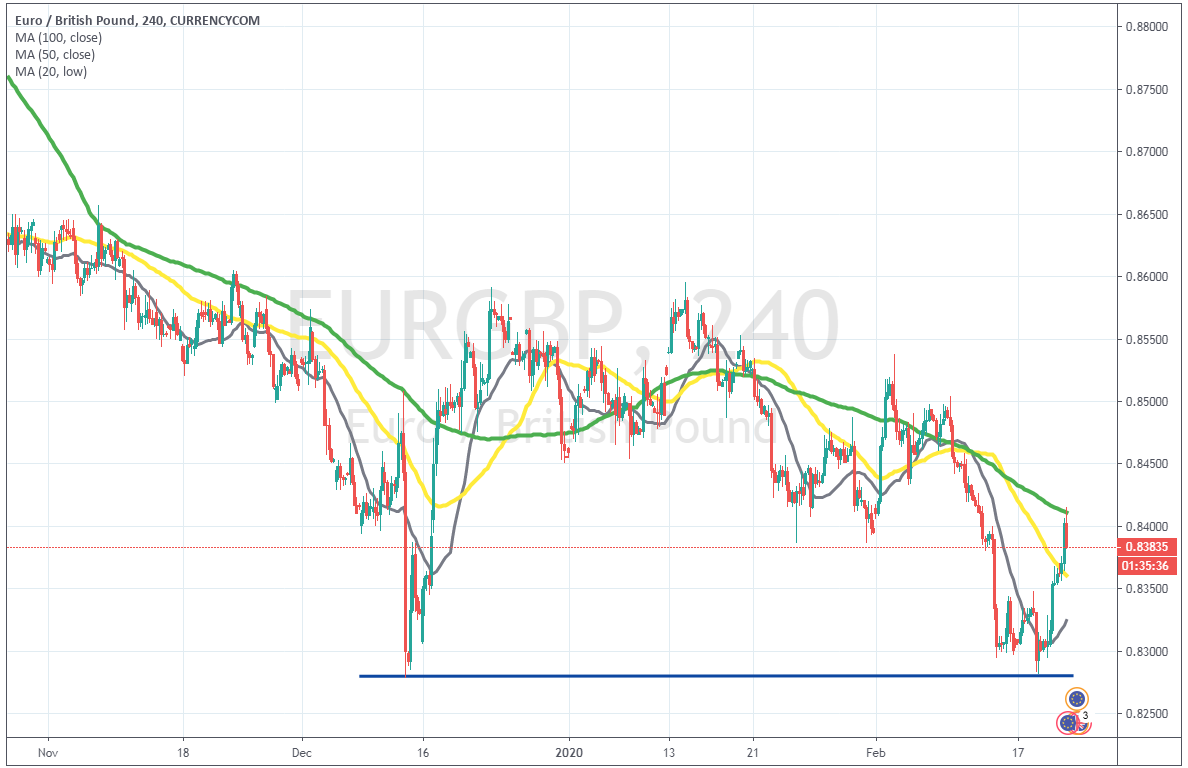 EUR/GBP failed to push above the 100 SMA today

EUR/GBP has been on a bearish trend since August last year, after manufacturing fell deep in contraction in the Eurozone that month, increasing fears of a recession. The ECB turned dovish the following month, cutting deposit rates further to -0.50% and reintroducing the QE programme again. As a result, EUR/GBP has been bearish since then, although we saw a bounce off the 0.8280 level by the middle of last month, as the sentiment from coronavirus outbreak hurt the GBP more than the Euro.The price returned back down, but it bounced again from that area, so it seems like a support zone has formed around 0.8280s.

But, the bounce stopped right at the 100 SMA (green) on the H4 chart. This moving average has been acting as resistance before, reversing EUR/GBP lower several times in 2019. Now, it seems like 100 SMA has turned into resistance again for this pair. This looks like a good selling opportunity, so we will try to open a short signal below the 100 SMA, if the EUR/GBP tries it again and it gets rejected for the second time.

The spread of Coronavirus is slowing the pace, which should have helped improve the sentiment, but the fact that major Chinese companies are being bailed out by the government, shows that the virus will have a big impact on the economy. We’ll see how big the impact will be, but it is already hurting the sentiment.