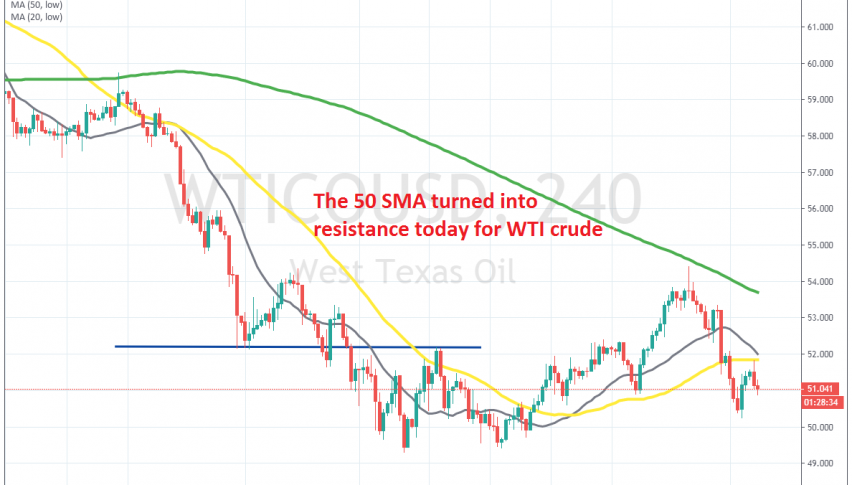 Crude Oil has been bearish since the second week of this year, when it reversed down, as tensions between US and Iran decreased and the production/supply lines in the Middle East weren’t disrupted. Then came the coronavirus and the decline picked up, sending WTI Crude Oil below the big round level at $50, which had formed a support zone around it.

But, we saw a reversal earlier this month, as OPEC was looking to cut production further by an extra 600k barrels/day. That’s still not confirmed as Russia is still deciding, but it was enough to stop the decline. Coronavirus was being contained mainly within China until a week ago, which also helped improve the sentiment for risk assets such as Crude Oil.

But, the retrace higher stopped below the 100 SMA (green) on the H4 chart, which turned into resistance for WTI crude. Oil reversed down and yesterday it slipped below the other moving averages. Earlier today we saw another retrace higher, but the 50 SMA (yellow) held as resistance, which shows that sellers are back in control now. We missed that opportunity to sell Oil at the 50 SMA earlier today and the price is already 80 pips lower now. So, we will follow the price action for another pullback at the 50 SMA, where we plan to go short on Crude Oil.