The panic button went off overnight, but the situation has improved now

Here we are, on a new month for this year, but the problems are the same old ones, a weak global economy and a spreading virus that has scared the hell out of the global population. If not due to the death toll, the impact that it is having in the global economy is surely to be scared about. Over the weekend, we saw the Chinese manufacturing and non-manufacturing PMI indicators dive down to 36.7 and 29.6 points respectively. That set off the panic among economists and central bankers.

That was the deepest dive in both sectors ever recorder anywhere for the PMI indicator. That showed that the effect on the Chinese economy is going to be severe. Chinese government said a while ago that outside of Hubei the situation is OK, but can you trust them? So, this virus might send the Chinese economy in recession and other major economies as well, as it spreads in other parts of the world. Today’s manufacturing figures from Europe showed some further improvement during February, but the effect of coronavirus will be felt this month. EUR/USD on the other hand, has been rallying since last Monday for 350 pips as odds of the FED cutting rates this month increase, but the Euro doesn’t rally have any reasons to rally. 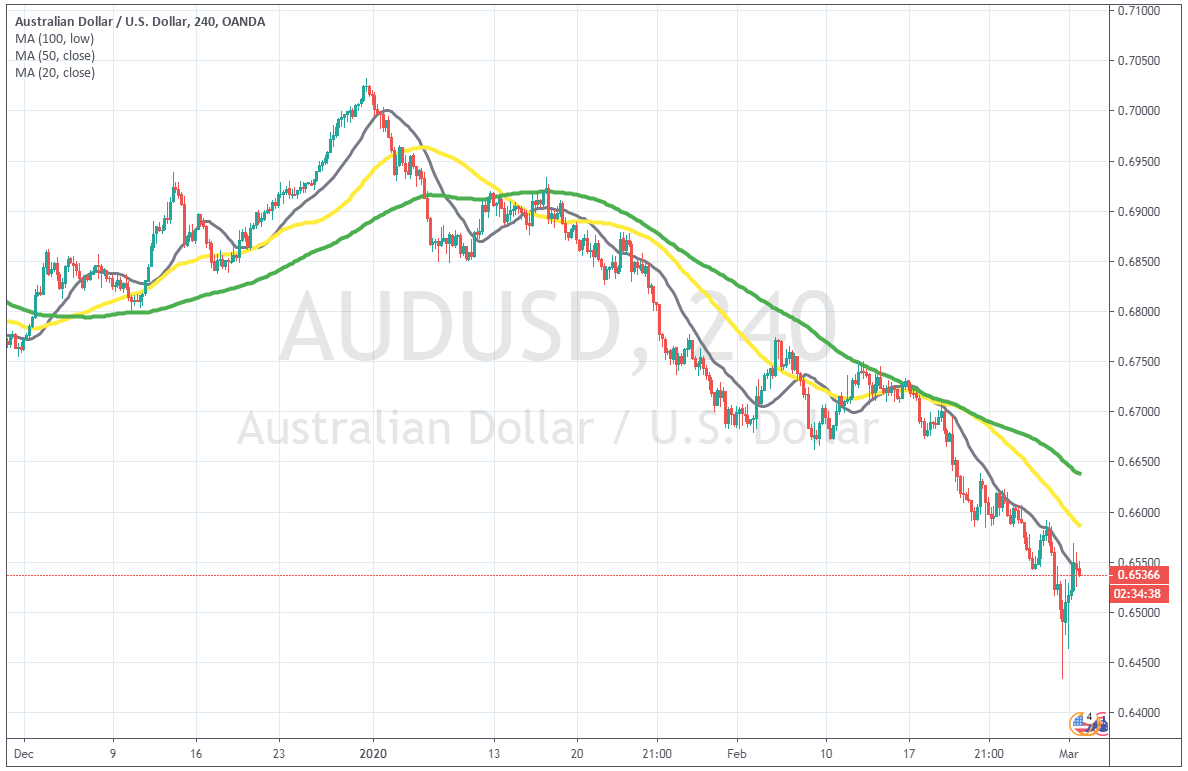 This will reduce the demand for raw materials and other goods from Australia, so the AUD should remain bearish. But, the odds of FED cutting interest rates this month have gone up to 100% and the USD has weakened in recent sessions, mainly shown in EUR/USD which has climbed nearly 4 cents since last week. As a result, AUD/USD has retraced higher in the last few sessions, but the retrace seems complete now on the H4 time-frame chart. The price has found resistance at the 20 SMA (grey) which has done this job before and it is also overbought. Buyers seem exhausted now and a morning star candlestick formed below the 20 SMA, which is a reversing signal. We decided to sell the retrace, so now we are short on AUD/USD.

Stock markets opened with bearish gap lower this morning, after the horrible Chinese data for February, which was released over the weekend. They continued to slide lower for a while, but the decline has stalled for now. Although, I think that the decline will resume again, as coronavirus spreads across the globe.

Check out our free forex signals
Follow the top economic events on FX Leaders economic calendar
Trade better, discover more Forex Trading Strategies
Related Articles
Strong Bullish Sign in the USD Today, but Can It Keep That Up?
USD/CAD surged 150 pips higher today as the USD buyers returned, although it's the first trading day of 2023
1 month ago

Forex Signals Brief for January 3: Global Manufacturing in Contraction Besides Switzerland
1 month ago