Has the Tide Shifted for EUR/USD? - Forex News by FX Leaders 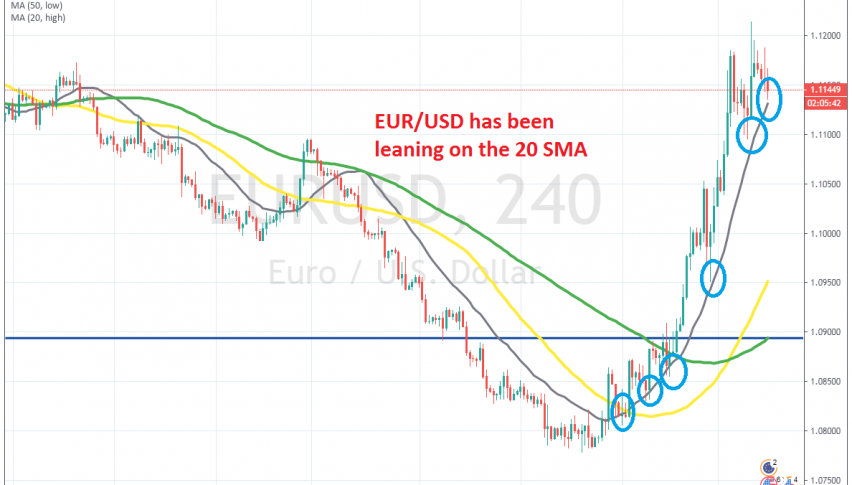 Has the Tide Shifted for EUR/USD?

The bullish move keeps stretching higher on the H4 chart

EUR/USD has been on a bearish trend for about two years, but we saw a decent pullback higher during the last few months of 2019, as sentiment improved due to the Phase One deal between US and China. Although, the downtrend resumed immediately, once the new year began.

Tensions in the Middle East and then the coronavirus outbreak in China hurt the sentiment, turning risk assets bearish. EUR/USD declined and broke below 1.08 late last month. But, a reversal took place in the last week of February and this pair has been climbing since then.

The FED was expected to cut interest rates due to the epidemic and they did so yesterday, in a surprise 50 bps rate cut. So, EUR/USD has climbed around 450 pips from the bottom to the top. This has been quite a climb, which begs to question the larger bearish trend.

So, is this a shift in the trend for this pair? The 20 SMA (grey) has been providing support during this time, which shows that the trend is pretty strong, since the smallest MA has been pushing this pair higher. But, the other currencies have’t been benefiting too much from the USD weakness, apart from yesterday after the rate cut. So, I think that this is just another decent pullback higher, before the larger bearish trend resumes.