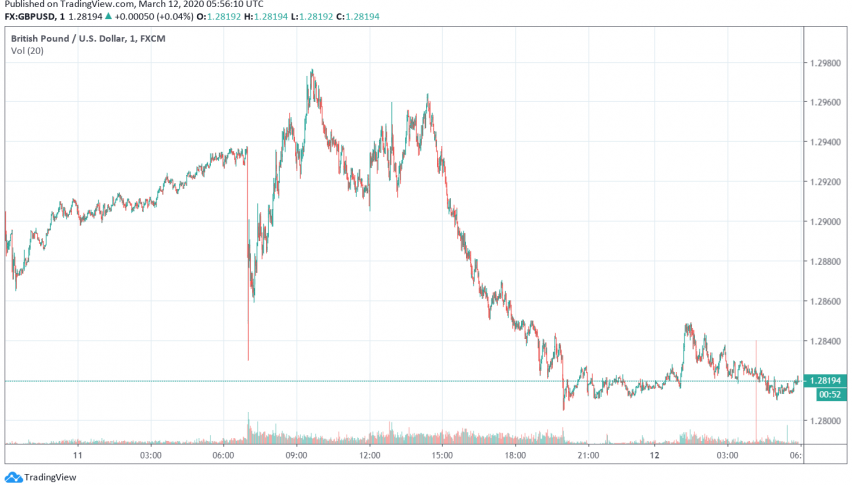 The Sterling is trading steady against the US dollar a day after the British government unveiled its budget and announced stimulus measures to protect the economy from the coronavirus impact, even as the BOE delivered a surprise rate cut. At the time of writing, GBP/USD is trading at around 1.281.

In the previous session, Britain’s finance minister Rishi Sunak confirmed that his government would set aside 30 billion pounds for fiscal stimulus while the BOE reduced its key policy rate to 0.25% in an effort to prevent the economy from slipping into recession over the coronavirus crisis. Tbis move helped GBP/USD climb to a weekly high on Wednesday, but it has edged lower since then as the market sentiment deteriorated after the WHO declared the coronavirus outbreak as a global pandemic.

This caused a flurry of activity in financial markets, sending safe haven assets and currencies higher while other instruments like stock markets and other currencies edged lower. Wednesday’s rate cut was the first by the BOE since the financial crisis over a decade ago and came in reaction to other central banks turning dovish to protect their respective economies from weakness.

The BOE also announced plans to let banks use their counter-cyclical capital buffer to increase lending towards businesses and households to tide through the time of crisis caused by the coronavirus. In addition, the government suspended property tax for up to one year for smaller businesses impacted by the outbreak and announced funding for sick pay in the latest budget.