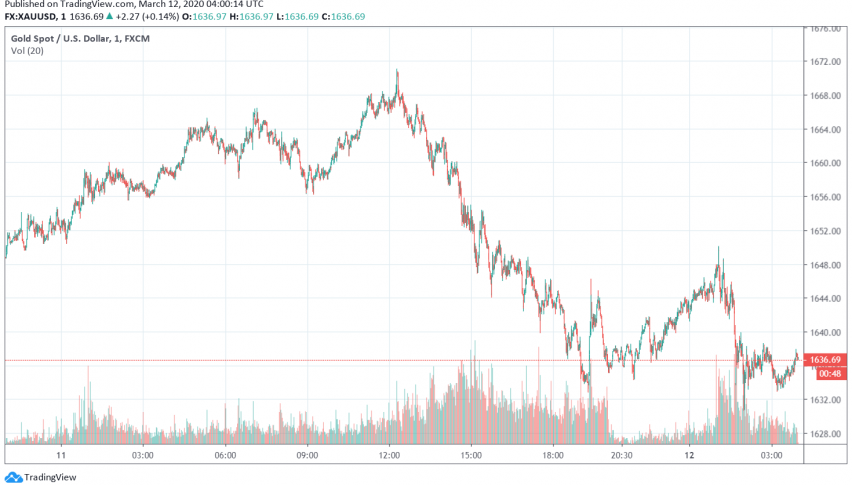 On Thursday, the safe haven appeal of gold remains in focus, sending prices higher as the WHO officially declared the coronavirus outbreak as a global pandemic amid the escalating number of infections and death toll worldwide. At the time of writing, GOLD is trading at a little above $1,636.

Leading economies and central banks have already announced stimulus measures to offset possible economic impact of the outbreak and to prevent recession in the global economy while others are expected to roll out more measures shortly. Global stock markets continue to decline and head towards bear territory over the increasingly risk-off sentiment in financial markets.

Meanwhile, US President Donald Trump announced a month-long travel ban between the US and Europe, sending the US dollar lower and further helping gold prices climb higher as a result. On Monday, gold trading volume soared to a high of $100 billion, as confirmed by the London Bullion Market Association (LBMA).

Gold is expected to remain bullish in the coming days as more stimulus measures are expected to be announced by leading governments and central banks as the number of affected cases climb higher across the world. The rapid spread of the virus has heightened the possibility of a recession in the global economy, sending more investors towards the safety of the yellow metal over other instruments.

Uncertainty Keeps Gold Bouncing Between MAs in all Charts, Until the Breakout That's Coming Soon
4 days ago