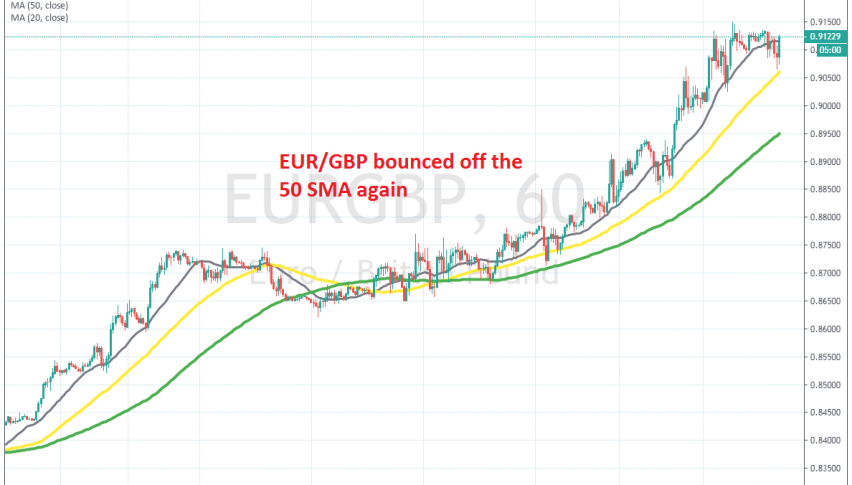 The bullish trend continues for this pair

EUR/GBP turned bullish this year, after the rally in the GBP, following Boris Johnson’s strong win in the UK elections in December. The optimism of the elections faded quickly, as UK will still have to reach a trade deal with the EU by the end of this year, otherwise it will end up with a hard Brexit.

But now, coronavirus has halted everything and it has made negotiations between EU and UK more difficult than they already are. UK PM spokesman said earlier that EU and UK are looking at options for video conferencing for trade talks.

So, EUR/GBP has been bullish and MAs have been doing a great job pushing the price higher. They have all taken turns in providing support during slight pullback, the 20 SMA (grey), then the 100 SMA (green) for some time and now the 50 SMA (yellow).

Today we saw a pullback lower, but the 50 SMA held again as support. The price formed a doji candlestick above that, which is a bullish reversing signal and now buyers are back in control, with EUR/GBP bouncing off the 50 SMA. I missed that chance, because the bounce was pretty quick, but will follow this pair, in order to buy other pullbacks lower at MAs.