Crude Oil Moves Below and Above the $20 Level, But MAs Keep Providing Resistance - Forex News by FX Leaders 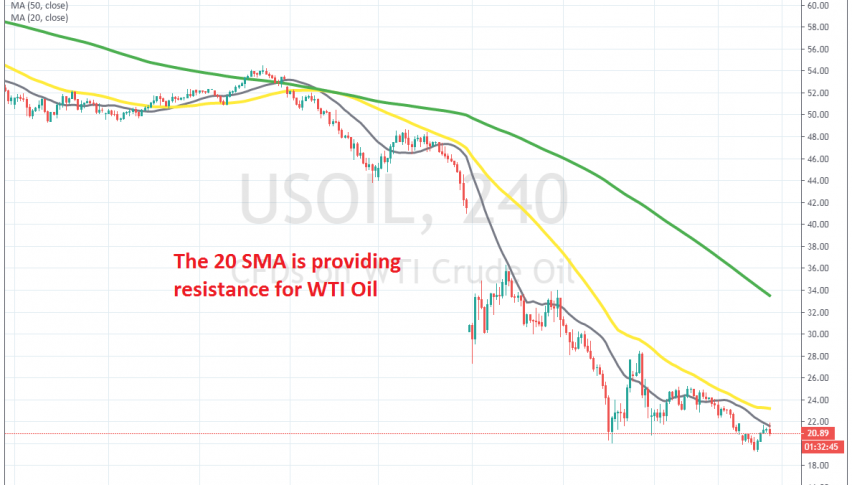 Crude Oil Moves Below and Above the $20 Level, But MAs Keep Providing Resistance

Crude Oil is turning back down at the 20 SMA

Crude Oil has been on a steep bearish trend this year, but the major crash came after Russia refused to join OPEC in a massive cut in production by 1.5 million barrels/day. As a result, Crude Oil opened with a massive 10 cent bearish gap the following Monday and it has been continuing lower since then.

US WTI crude fell to $20 this month, but was finding support at the big round level at $20. But that support zone was broken yesterday and WTI fell to $19.30s. Although, we saw a reversal higher today and Crude Oil moved above $20 again and got close to $22.

But, moving averages continue to kill any hope of a bullish reversal. The 50 SMA (yellow) has been providing resistance during pullbacks, and now it’s the 20 SMA (grey) which is taking up that job on the H4 chart. US crude has been finding resistance on the 20 SMA today and seems like it is reversing down now, having given back around $1. We haven’t gone short on Oil yet, but this looks like a good opportunity to sell, which we might actually do.

Greed Quickly Turns Into Fear for Crude Oil
2 days ago