Shorting the Pullback in WTI Crude, as the 50 SMA Catches Up - Forex News by FX Leaders 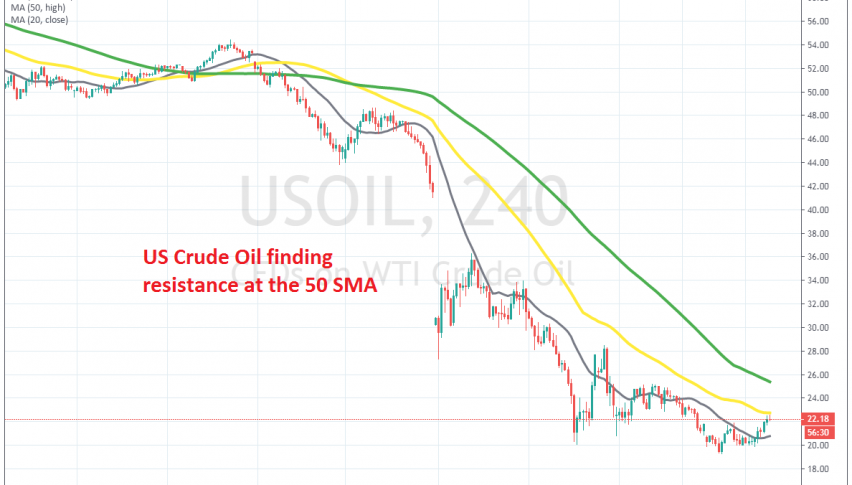 Shorting the Pullback in WTI Crude, as the 50 SMA Catches Up

The pullback is complete for NZD/USD on the H4 chart

Crude Oil has turned massively bearish in the last two months, after Russia declined the offer from OPEC to cut production by 1.5 million barrels/day. Saudi Arabia opened a war on Russian Oil companies, which does against the US shale producers as well and US WTI crude has crashed lower, losing more than $45 since early January.

The trend has been really strong, since the smaller moving averages, such as the 20 SMA (grey) have been providing resistance and pushing the price lower on the H4 chart. The pullbacks higher have been quite weak, which also shows the strength of the trend.

So the pressure is totally to the downside, and on Tuesday US WTI crude slipped below the big round level at $20. But, we have seen a pullback in the last few sessions, after Trump said that Iran or its proxies are planning attacks on US bases in Iraq. But, the 50 SMA (yellow) has just caught up  and it is already providing resistance on this time-frame. So, we decided to go short below the 50 SMA, after it seems to be rejecting the pullback. Now, let’s wait for the bearish trend to resume.

Are The Tides Turning For Ripple (XRP) Vs The SEC?
4 hours ago