The Oil War Is Not Over, Watch Out For A Big Gap on Monday Open - Forex News by FX Leaders

The Oil War Is Not Over, Watch Out For A Big Gap on Monday Open

U.S. Oil Supplies Are On The Rise As Fall Seasonality Kicks In.

Last year, crude Oil had the tendency to be bearish, as the trade war between US and China hurt the global economy and in particular manufacturing and the industrial production. These sectors use quite a lot of energy, especially in China, so the trade war which hurt the Chinese economy was keeping the pressure on for crude Oil. That’s the reason OPEC+ decided to cut production by 50k barrels/day in December. That offered crude Oil some support and the tensions between US and Iran early in January gave Oil another push higher.

But, coronavirus broke out in China, which hurt the Chinese economy further, as February’s economic data showed and the demand for energy products fell further. The virus spread to the rest of the world, which is now in lock-down and US WTI crude Oil fell close to $40. Saudi Arabia tried to anticipate a crash in Oil prices and they called an OPEC+ meeting in early March, with the intention of cutting production further by 1.5 million barrels/day.

But, Russia refused to join in and crude Oil crashed lowed. It opened with a $10 gap on the following Monday and this week US WTI crude fell below $20, as Saudi Arabia is flooding European and Chinese markets with very cheap Oil. Some say that Saudis did that to hurt the Russian Oil and energy industry, but Putin has replied that this Russian industry has lots of room to fall back. 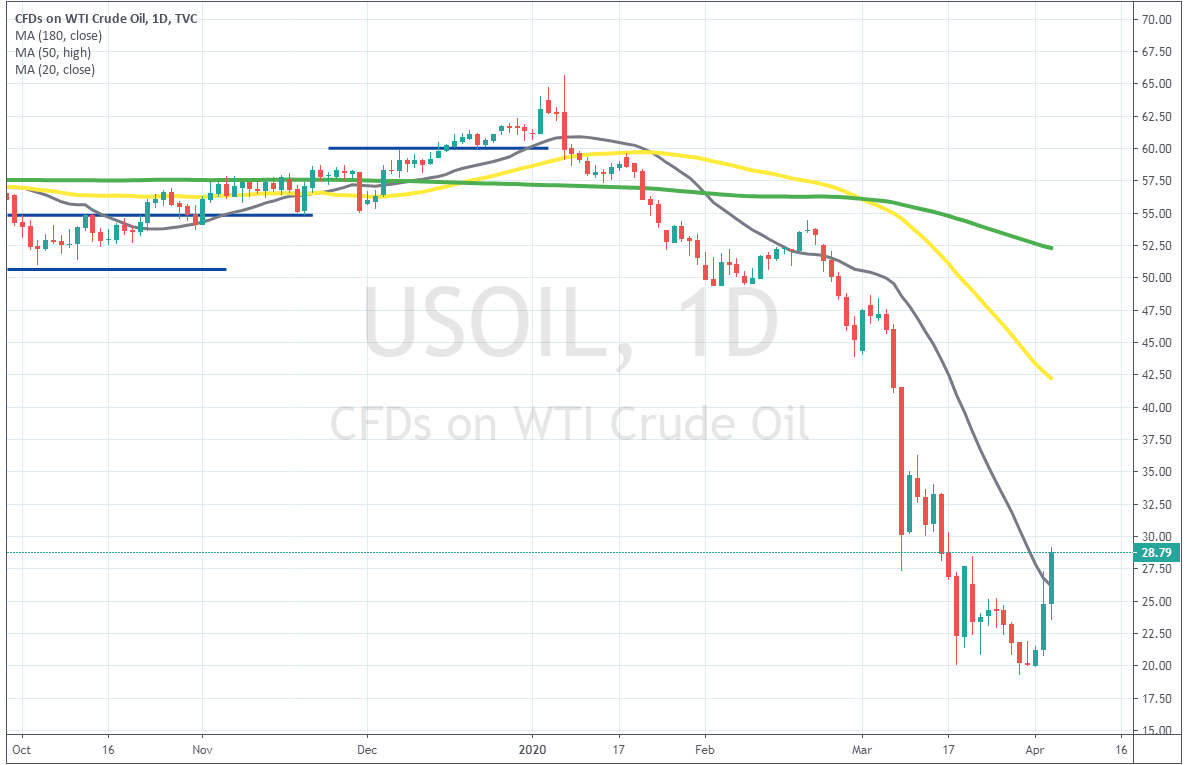 Others say that Russia wanted Oil prices lower to bankrupt the US shale producers. But whatever the reason Putin refused to cut, that action opened an Oil war with the Saudis. The Middle East Oil giant dominates the oil market and knows no rivals. If someone dares to defy this authority, the Saudis have many tools at their disposal on how to bring down a rival. When Russia refused to extend an OPEC+ deal, Saudi Arabia declared a price war, crashing down Brent oil price to $19 per barrel, its lowest level since 2002.

US President Donald Trump has also participated in this war, asking for OPEC to meet and find a solution, while scheduling to meet with oil executives. HE made the following remarks yesterday:

Things looks good in Thursday and Friday, as Saudis said that an OPEC+ meeting is taking place on Monday, although Russia hadn’t replied yet. Nonetheless, that was a great signal; the over flooding of markets with cheap Oil was going to be over and now we were going to get some cuts in production. As a result, US WTI crude rallied nearly $10 higher and closed close top $29.

But, things seems to have gone for the worse once again. It appears now that the meeting has been postponed for March 9, after some back and forth comments Russia and Saudi Arabia, which didn’t sound very friendly. Russia did offer to join in, if US joined in a coordinated cut of 10 million barrels/day. But apparently, they fell apart at some point and now Monday’s OPEC+ meeting has been postponed for April 9, which is a sign of a failure to reach a deal. So, Russia and Saudi Arabia have restarted a war of words and Trump said the “free market” would sort out the oil glut.

US and Canadian officials are discussing putting tariffs on oil from Russia and Saudi Arabia if the pair don’t quickly reach a deal to curb production,k so the situation doesn’t look promising. As a result, crude Oil might turn bearish again on Monday open and lose all the gains of the last two days. Or, we might even see another bearish open his week, after the $10 gap we saw a month ago. It might not be as big, but it could do some damage.

TRAMP says, you all have to cut your production, but the US doesn’t,
because it has legal problems … OK, so first solve the issue, there in the USA how and there will be, reduction, in production,
and then Trump, the request for reduce oil production from the others,
ie, what does say everyone must reduction in production and the USA earning money from rising prices !!!
this is crazy !!!

The problem is that US shale producers are not producing. Oil needs to be at $60 so they can break even. Only above $60 they can make a profit, at $20-30, they are losing money.