Another Week, Another Massive Increase in Unemployment Claims in US - Forex News by FX Leaders 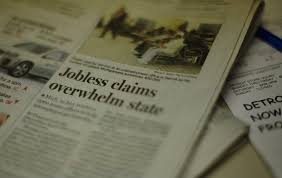 Another Week, Another Massive Increase in Unemployment Claims in US

The jobs sector was doing pretty well in the US last year and in the first two months of this year, even though when the economy was weakening. The unemployment rate was standing a around 3.5% for many months and new jobless claims were pretty low.

But, they jumped higher three weeks ago by more than 3 million, then last weeks report was even worse, showing that unemployment claims rose by more than 6.8 million. Today’s report was expected to show 5 million jobless claims, but it came even higher, above 6.6 million again. Below is the employment report for last week:

So, the unemployment claims don’t seem to stop, despite the lock-down beginning about a month ago. But, the US didn’t shut down all at once, it has ben shutting down states one after the other, so the jobless claims will keep being high as long as it continues. The USD has turned bearish again now on these figures, losing nearly 100 pips.