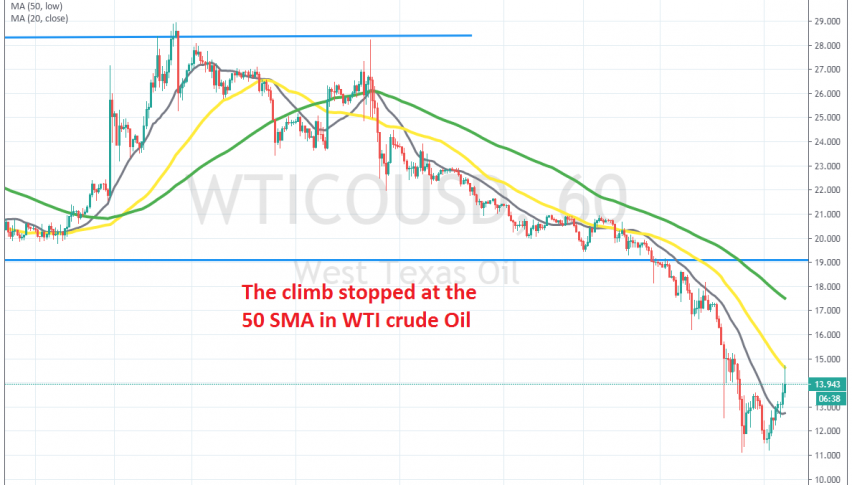 The downtrend continues on the H1 chart

Crude Oil has fallen off a cliff in recent weeks. It crashed down in March, as Saudi Arabia opened an Oil war with Russia, when Russia didn’t agree to join OPEC on a 1.5 million barrels/day cut in production back then. As a result, US WTI crude fell below $20, from above $50. But, Russia agreed to join OPEC and they decided to cut production by 9.7 million barrels/day.

As a result, US crude Oil climbed to $29 earlier this month, but it turned bearish again as markets realized that that wasn’t going to be enough to balance the decline in demand due to coronavirus shut-down. Saudi Arabia decided to flood markets with cheap Oil again, despite the deal and crude Oil prices have crashed lower, with US WTI falling close to $11 and US Oil futures falling to nearly -$40/barrel.

But, during the European session, WTI crude has reversed higher, climbing nearly $4, to $14.70. But, the climb seems to have ended right at the 50 SMA (yellow) on the H4 chart and now crude Oil is retreating back down. IEA chief commented earlier that OPEC+ should cut production further, but with Saudi’s flooding markets, it’s hard to see any results.

Selling Crude Oil, As it Gets Rejected at MAs
1 day ago