Will the 50 Daily SMA Turn Into Support for WTI Crude Oil? - Forex News by FX Leaders 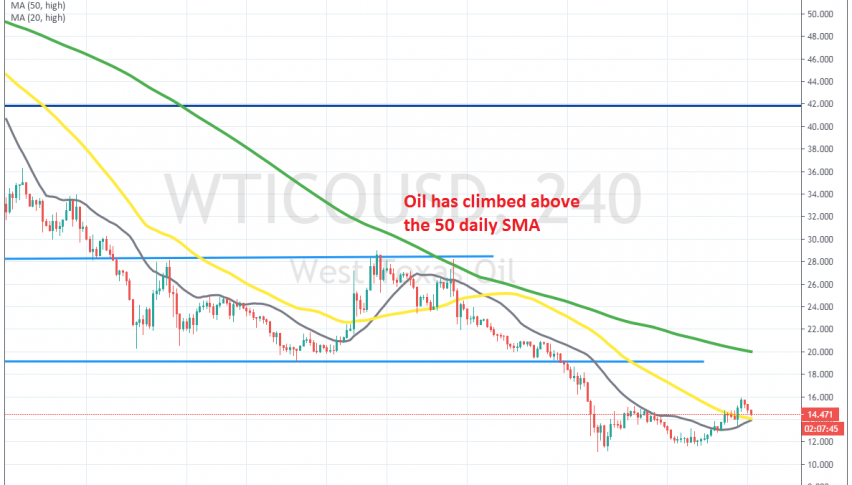 Will the 50 Daily SMA Turn Into Support for WTI Crude Oil?

This looks like a good attempt to reverse the trend

Crude Oil has been going through the worst crash in history since late February. It first started after Russia declined OPEC’s offer to cut production by 1.5 million barrels/day. US WTI Crude Oil was trading at around $55 back then, but then entered a massive bearish trend and fell below 20.

Russia and other Oil producing countries finally agreed to join OPEC as cororonavirus spread across the globe and the world went into lockdown. The virus continues to spread in the West, or at least rise because by now the largest part of the population has already passed it with no symptoms or just as a normal flu.

But, the lockdown continues nonetheless, which is killing the global economy, and Oil prices crashed below $0 at some point. During this time, moving averages have been doing a great job in providing resistance during retraces higher – the 20 SMA (grey) and the 50 SMA (yellow) in particular.

But, they both were broken yesterday as Crude Oil retraced higher. The price increased to $16 yesterday, after bouncing off the 20 SMA, but is reversing back down today. Although, the 50 SMA might turn into support for WTI Oil now. If it does, then we might see a more decent retrace higher, probably to $20 where I plan to go short. If not, then the bearish trend will resume soon.