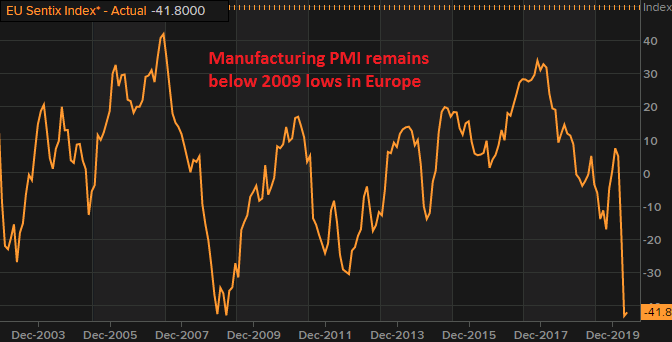 Investor Confidence Dives Deeper in Europe, But Expectations Pick Up

Let's see if manufacturing will rebound in May

The final manufacturing reports for April were released from the Eurozone earlier this morning. Manufacturing remains in deep contraction all across the continent. In Spain and Italy, the situation deteriorated further compared to May. The Sentix investor confidence also declined further, below the low levels back from 2009, but at least expectations picked up somewhat, which means that investors expect manufacturing to start reviving as countries begin to reopen.

The headline shows that investor sentiment remains extremely subdued, despite news of euro area economies starting to reopen over the past few weeks. The current situation index declined from -66.0 in April to -73.0 in May, but expectations at least improved a little from -15.8 in April to -3.0 in the May survey.

The manufacturing reports here show that manufacturers expect supply and demand disruptions to continue deep into 2020 at the very least, making the chances of a V-shaped recovery unlikely. Given such a challenging outlook, job cuts have continued to gather pace despite the widespread uptake of the short-time working scheme, thus raising the chances of a more protracted recovery.