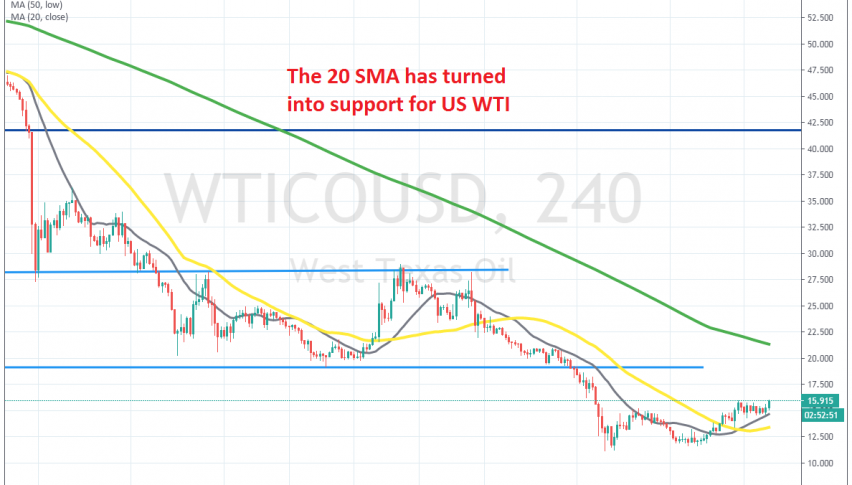 MAs Turn From Resistance Into Support for Crude Oil

Is the trend changing in Oil as the world reopens?

Crude Oil crashed lower below $20 in March, as Saudi Arabia flooded  markets with cheap Oil. We saw a retrace back up after OPEC+ decided to cut production by 9.7 million barrels/day. Although, the pullback ended pretty quick and the bearish trend resumed again.

At some point, US WTI crude fell to -$37, but it has retraced back up since then. During the decline, moving averages such as the 20 SMA (grey) and the 50 SMA (yellow) were providing resistance during the pullbacks, or during consolidation periods.

But, we have seen a retrace since the middle of last week and the price moved above them by the end of last week. Now, it seems like they have turned into support. In fact, it’s the 20 SMA which has switched places, which also shows that buyers are coming in as soon as they see an opportunity.

This is not exactly a trend reversal, but it is a respectable attempt to increase the price somewhat. Sellers still remain in charge and we will try to sell further up, probably close to $20, but as the West starts to reopen the economy, we might see a bigger rebound on crude Oil. It all depends on how the reopening will go though.