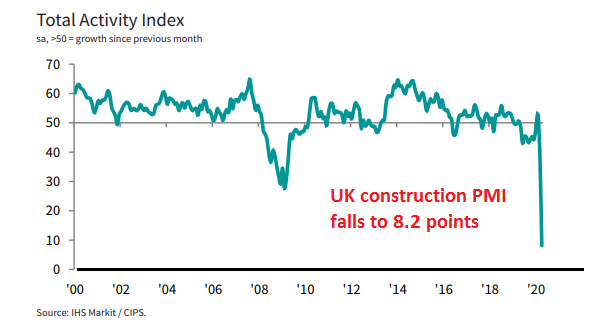 Construction Activity Falls to the Lowest Level Ever in UK

Construction has been one of the strongest sectors historically in the UK. It has had it’s weak periods, but has been the first sector to rebound back up, as we saw after the economic crisis of 2009. Construction did fall into contraction last May and remained there until February this year, when it bounced back up, just before coronavirus broke out in Europe.

But now the construction activity in Britain crashed to an all-time low during April, as clients freeze spending plans amid the fallout from the virus outbreak and business shutdowns. The real worry here is that this could lead to long-term disruptions and cause construction activity to be more subdued for a longer period than the drop seen in April. Markit notes that:

Below are the notes from surveying firm Markit:

“The rapid plunge in UK construction output during April stands out even in a month of record low PMI data for the manufacturing and service sectors. Widespread site closures and business shutdowns across the supply chain meant that vast swathes of the construction sector halted all activity in response to the COVID-19 pandemic.

“Around 86% of survey respondents reported a fall in business activity since March, while only 3% signalled an expansion. House building and commercial work were unsurprisingly the hardest hit, but civil engineering activity also fell at by far the fastest pace since the survey began in April 1997.

“A drop in construction activity of historic proportions in April looks set to be followed by a gradual reopening of sites in the coming weeks, subject to strict reviews of safety measures.

“However, the prospect of severe disruption across the supply chain will continue over the longer-term and widespread use of the government job retention scheme has been needed to cushion the impact on employment. Looking ahead, construction companies widely commented on worries about cash flow, rising operating costs and severely reduced productivity, as well as a slump in demand for new construction projects.”