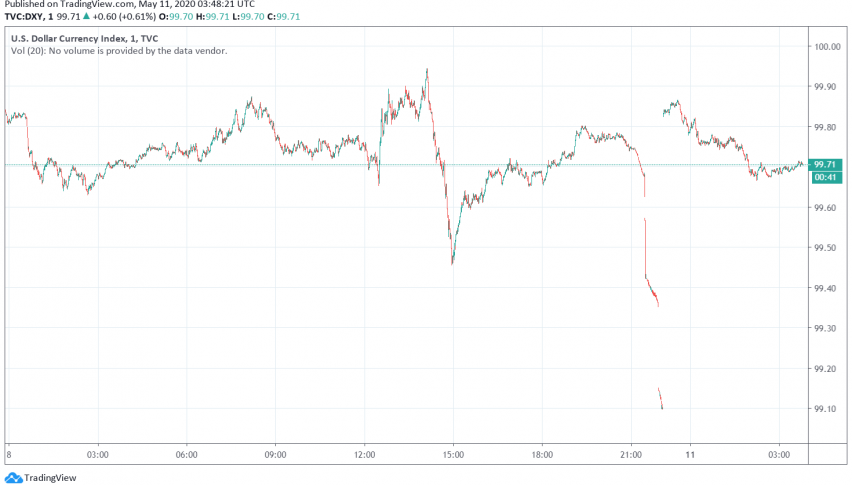 Early on Monday, the US dollar appears to be back in favor among traders, making gains against other currencies, supported by hopes for improvement in the global economy as the US looks to reopen some of its economy in the coming weeks. At the time of writing, the US dollar index DXY is trading around 99.71.

Despite the disappointing NFP report which released on Friday, the US dollar failed to turn too bearish as the high levels of unemployment were mostly expected and priced in by traders. In addition, latest news reports suggest the economic activity could resume in some parts of the US even before European countries reopen their economies, sending the dollar higher against its peers like the EUR and GBP.

The US dollar has also managed to strengthen against safe haven currencies like the CHF and the JPY, buoyed by an improvement in the market sentiment over hopes for economies reopening soon. Key manufacturing states in the US, including California, Michigan and Ohio, are looking to reopen factories and businesses soon, which could help prop up the US economy soon.

However, gains in the greenback are expected to remain limited owing to the continued uncertainty about the state of the global economy in the wake of the coronavirus crisis. Expectations for a recession still dominate, and with several countries extending lockdown measures, economic recovery could take longer than previously forecast, keeping the market sentiment subdued for now.

Weakness in US Dollar Continues as 10-Year US Treasury Yields Approach 1.50%
10 hours ago