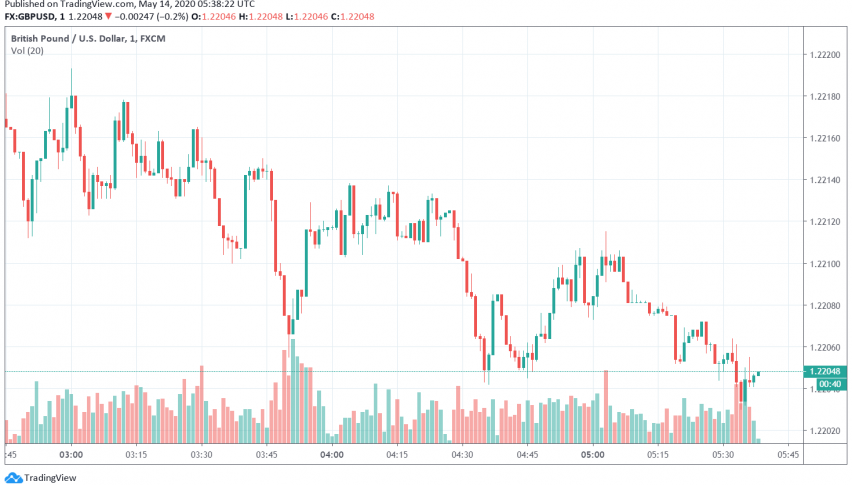 On Thursday, GBP/USD continues to trade weak after falling to the lowest level in six weeks during the previous session due to a strengthening in the US dollar after Fed chair Powell shot down the possibility of negative interest rates. At the time of writing, GBP/USD is trading around 1.220.

Additional weakness in GBP/USD was driven by the release of the UK GDP report on Wednesday which revealed that the British economy had contracted by 5.8% during March even as the country went into shutdown mode owing to the coronavirus pandemic. Traders are hesitant to trade the pound over worries about Britain’s economy slipping into a deep recession despite the several fiscal stimulus measures announced by the government.

The British government has confirmed its plans to extend its job retention scheme until the end of October in a bid to contain rising levels of unemployment in the wake of the crisis. However, according to a report on the Financial Times, the UK will have no choice but to increase taxes severely in the near future to make up for the upcoming high fiscal deficit this year.

So far this month, GBP/USD is down by around 2.8%, even though it has recovered from the lows touched in March when the Cable had fallen as low as 1.14. The multi-decade low was caused by a strengthening in the US dollar as a safe haven currency amid rising uncertainty in global financial markets about the economic impact of the pandemic.

GBP/USD Heads Down for the 50 SMA, as Brexit Issues Resurface
22 hours ago