Daily Brief, May 15: Everything You Need to Know to Trade Gold on Friday - Forex News by FX Leaders 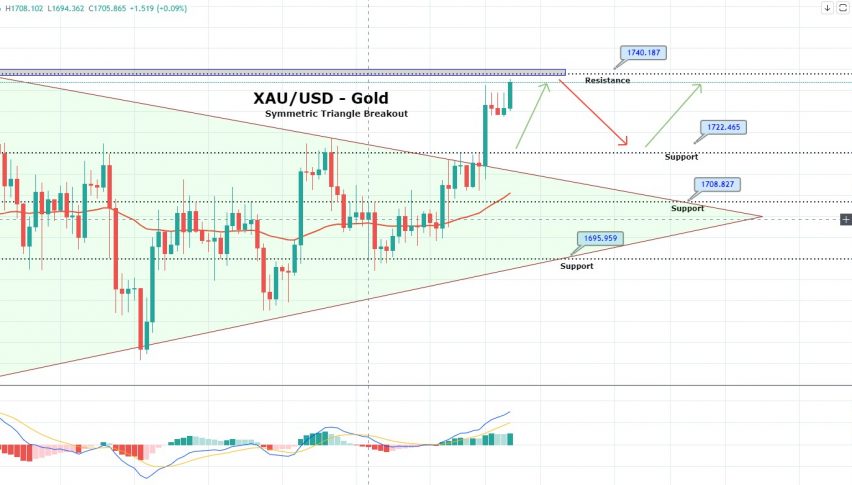 Daily Brief, May 15: Everything You Need to Know to Trade Gold on Friday

Gold prices closed at $1730.10 after placing a high of $1736.40 and a low of $1710.90. Overall the movement of GOLD prices remained bullish throughout the day. The surge in prices was due to the latest comments of US President Donald Trump about the Sino-US relationship. On Thursday, Donald Trump threatened to cut off relations with China and the safe-haven gold gained from this statement and reached near $1740.

The tensions between China and the United States have increased after the coronavirus pandemic. Trump has blamed China for the outbreak due to its mismanagement to contain the virus within the city of its origin. Trump has criticized China for withholding important information about the virus from the whole world at a critical time and not giving warning at the right time about the hand-to-hand transfer of the virus.

Before coronavirus, relations between the US & China were already not in good terms, and after a year-long trade war, they had signed a phase one trade deal in January to make their relations better. Under that deal, China promised to buy $200 billion worth of US farm products, and the US agreed to roll back tariffs in stages on Chinese goods. However, after coronavirus, Washington became angry about the mishandling of the virus outbreak by China and started blaming it for the global economic shutdown.

Meanwhile, reports from a Chinese state-run newspaper suggested that some government officials in Beijing were urging fresh talks and possibly canceling the phase one deal. In response to this, Trump said he was not interested in renegotiations. He became very angry and announced that he was very disappointed in China and had ideas to do many things, including cutting off the whole relationship.

Furthermore, aiding in the upward trend of safe-haven gold was the disappointing US jobless claims reports on Thursday. Nearly 3 million Americans applied for jobless benefits last week which weighed on the US dollar, and in turn supported gold prices. The Unemployment Claims from the US last week dropped to 2981K against the forecast 2500K and weighed on the US dollar. The Import Prices for the month of April showed a decline of -2.6% against the forecast -3.1% and supported the US dollar. 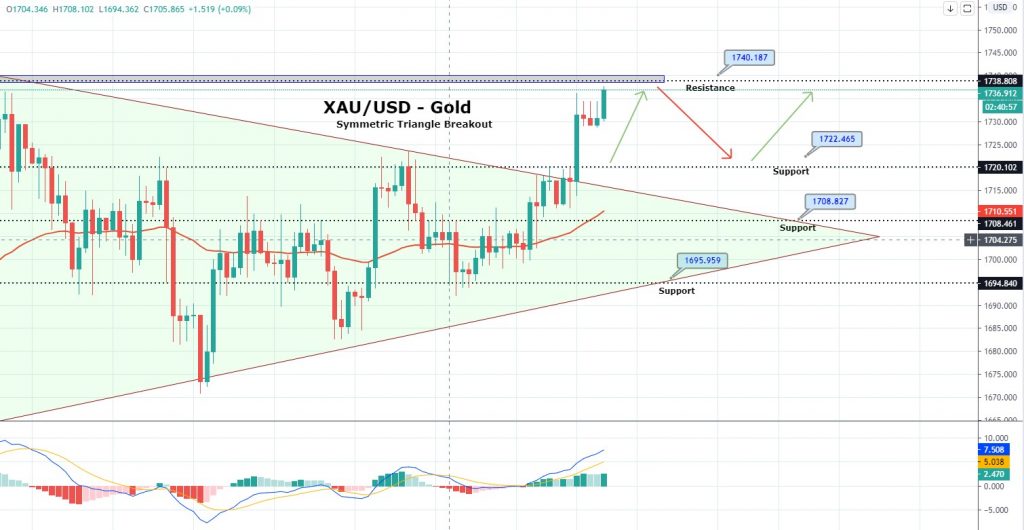 Recently, the precious metal gold broke out of the symmetric triangle pattern, which was providing resistance at 1,718, and now it’s trading bullish at 1,735. The recent bullish trend came in response to worse than expected Jobless claims data from the US. As per the US Labor Department, the advance figure initial claims were 2,981,000, a drop of 195,000 from the prior week’s updated level. A weaker dollar has triggered the bullish trend in gold, and now it’s likely to lead prices towards 1,740. Now, we may see bearish correction below 1,740, while further buying trades can be taken above 1,720.