US Unemployment Claims Soften, But Disappoint Once Again - Forex News by FX Leaders 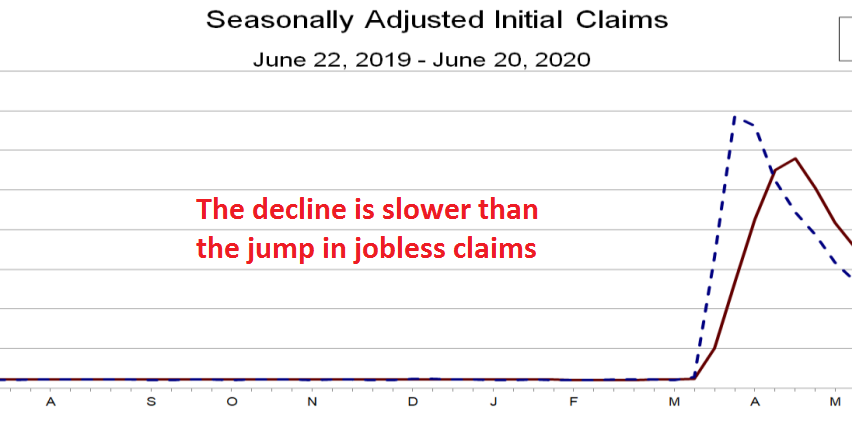 US Unemployment Claims Soften, But Disappoint Once Again

This looks like more of an upside-down square root

The US unemployment rate jumped higher to around 17% in April, but many economists predicted that it could be as high as 20%, due to the coronavirus lock-downs. They have been declining during the last several weeks, but the decline has been slower than expectations. Economist were hoping for a V-shape recovery, but unlike in other sectors, employment will take time to get back where it was pre-Covid19, after all sectors have settled and employers actively seeks workers.

So, while the jump in unemployment numbers was steep in March and April, the decline has taken a curve, as jobless claims cool but not by much. Below is the US unemployment claims report for last week:

US Unemployment Claims by the Department of Labor – 25 June 2020

The headline is higher than expected but still shows a decline compared to the previous week though continuing claims actually fell back under 20 million in the latest update here.The insured unemployment rate was 13.4%, also a slight decrease of 0.5% from the previous week but all in all, it still isn’t a pretty picture relative to what the monthly labour market report suggests in general about the job situation in the US.
I mean this is pretty much the third month of weekly initial jobless claims still coming in well above the 1 million mark, so there’s that to consider even if the trend is getting better. When you add the PUC claims and other extended benefits, there are 30.553m Americans out of work compared to 29.259 a week earlier.

Safe-Havens Struggle To Open The Forex Week
5 hours ago

USD Turns Bullish for the First Time in November, After Great Services and Manufacturing Data
7 hours ago
Comments