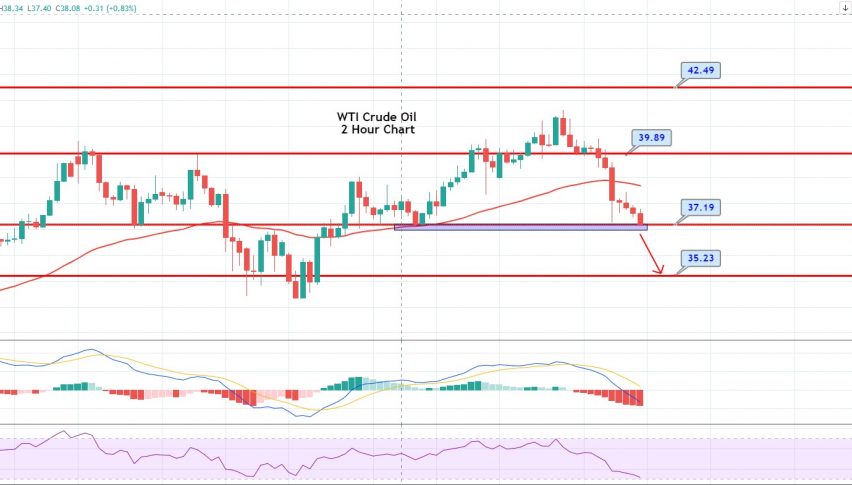 During Thursday’s Asian trading hours, WTI crude oil prices failed to stop their previous day’s losing streak and dropped below 38 handles from the new three-month high of 41.63 level while representing sharp 5% decline during the last session mainly due to the bearish Energy Information Administration’s (EIA) US crude stockpiles report which showed record-high US crude inventories. Additionally, the reason for the decline in crude oil could also be attributed to the risk-off market sentiment triggered by multiple reasons. At this particular time, WTI crude oil is currently trading at 37.77 and consolidating between 37.50 and 38.45.

Crude oil futures dropped 26 cents, or 0.7%, to $37.75 per barrel at 02:45 GMT on the day, after losing $2.36 on Wednesday. At the data front, the EIA data showed that the US crude oil inventories increased by 1.4 million barrels during the previous week, beating expectations for a 299,000-barrel increase and marked the third straight record high for crude in US storage, which eventually strengthened oversupply fears and contributed to declines.

However, the declines in crude oil were further bolstered by the intensified fears over the second wave of coronavirus globally, as the increase in the ratio of hospitalized people (infected by virus) in Texas, California, and Florida fueled the fears of the second wave and faded optimism over the V-shaped recovery which eventually weighed on the oil demand outlook. The US marked the most massive single-day total of new COVID-19 cases on Wednesday with over 36,000 figures.

On the other hand, the International Monetary Fund (IMF) joined the league of challenging catalysts while saying that the coronavirus outbreak hit the global consumption deeper than expected. As a result, the IMF expected the global economy to shrink by 4.9% in 2020 versus the April’s forecast of 3.0% contraction. In the meantime, the IMF added that further policy measures would be needed to balance the virus’s economic damage. This statement heightened the worry in the higher-yielding oil and kept oil prices under pressure.

Moreover, the reason for the risk-off market sentiment could also be attributed to the fresh geopolitical tensions triggered by Trump’s latest potential action to impose new tariffs on $3.1 billion EU/UK goods. As a result, the European Union has criticized the US’s move while complaining that this tariff would further harm the EU companies that were already damaged from COVID-19, which eventually added strength to the risk-off market sentiment.

At the US-China front, Trump has ordered US Trade Representative to check whether China was buying US lobsters under the phase one trade deal. He also said that if those purchase ratios were met with China’s promises, the United States Trade Representative has been directed to use his discretion to impose reciprocal tariffs on the Chinese seafood industry, which added strength to the risk-off tone. As a result, the 10-year US Treasury yields dropped to 0.674%, while stocks in Japan and Australia also flashed losses. It’s worth mentioning that markets in China and Hong Kong are off today.

At the USD front, the broad-based US dollar extended its overnight gains and rose sharply from session lows mainly due to renewed safe-haven demand on fears of the second wave as coronavirus cases continue to mount. However, the gains in the US dollar turned out to be one of the key factors that kept a lid on gains in the oil prices, which are inversely related to the price of the US dollar. The risk sentiment will continue to control the oil-price action while market participants will keep their eyes on the trade and virus updates for near-term direction. 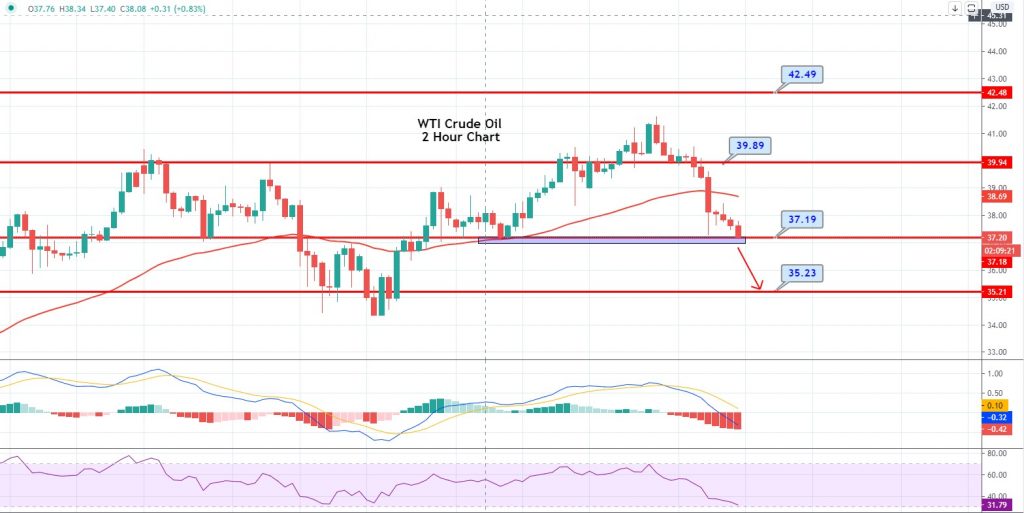 The technical side of WTI crude oil extends support at 37.19 level, which also marks a second bottom level. Closing of candles below this level may help us capture a quick sell trade until 35.23 level. At the same time, the leading indicator EMA is suggesting bearish bias and the RSI and MACD, which can lead WTI prices lower to 35.23 targets. So, the idea is to stay bearish today at 37.365 with a target of 37.065.

Forex Signals Brief for Nov 25: Risk Assets on the Rise
39 mins ago
Bullish Bias Dominates Crude Oil - Underpinned by Optimism Over a Potential Vaccine!
The WTI crude oil prices managed to extend its previous day bullish streak. Since March, they hit the highest level above mid-$43.00 marks..
17 hours ago