Daily Brief, July 22 – Everything You Need to Know About Gold! - Forex News by FX Leaders 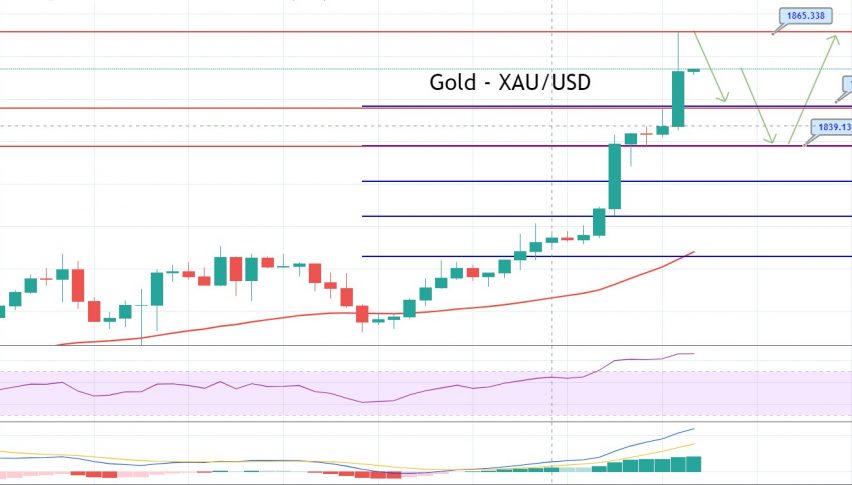 Daily Brief, July 22 – Everything You Need to Know About Gold!

Prices for the precious metal closed at 1,841.70, after placing a high of 1,843.47 and a low of 1,815.79. Overall, the movement of gold remained bullish throughout the day. Gold prices rose to a nine-year high on Tuesday, boosted by a dollar sell-off and expectations for increased stimulus to help the recovery of economies hit by the pandemic.

This week, US congressional leaders are set to discuss a fresh stimulus package, while European Union leaders finally reached consensus regarding the massive, historical stimulus plan, worth EUR 750 billion on Tuesday morning.

Gold gained instantly, when this news was released, reaching record nine-year highs, close to the 1,845 level. All eyes are now on Congress, to see what they will include in their next coronavirus stimulus bill, which could include a second set of stimulus checks. Senate Majority leader Mitch McConnell said that lawmakers wanted to send another round of direct payments on Tuesday.

According to estimates of the Center on Budget and Policy Priorities, about 17.3 million Americans, who are currently receiving the first checks of $ 600 per week, are at risk of not receiving them, should Congress fail to pass the stimulus bill this week.

House Minority leader Kevin McCarthy said that Congress would not pass the next stimulus bill until August. Meanwhile, Speaker of the House, Nancy Pelosi said she hoped that both parties could come to an agreement regarding the second stimulus bill by the end of next week.

In March, the CARES Act was passed. It set aside an additional $ 600 per week in unemployment insurance for jobless Americans, on top of their state benefits. This Act would only go through to the week ending Saturday, July 25.  If Congress were to wait until August to pass an extension, unemployed Americans could go a few weeks without Federal Pandemic Unemployment Assistance.

The US dollar suffered from the headlines on the next stimulus package, and the weakness of the US dollar strengthened gold prices on Tuesday.

On the virus vaccine front, the leading British drug-maker AstraZeneca and Oxford University disclosed that, in a test study conducted during the early stages of its clinical trials, their COVID19 vaccine had induced an immune response.

Despite these positive segments, GOLD prices continued to gain, as the growing concerns surrounding massive stimulus packages weighed heavily on the US dollar, pushing the yellow metal, due to their negative correlation.

Furthermore, the US dollar was also weak because of the surge in coronavirus cases in the US and worldwide. On Tuesday, the cases of the virus worldwide reached a record high of 14.6 million, which raised the safe-haven appeal, lending support to gold. In the absence of any macroeconomic data from the US, gold continued to follow the stimulus package and coronavirus updates.

The precious metal GOLD skyrocketed, to place a six-year high on the back of increased COVID19 cases and odds of further stimulus from most of the world’s leading economies. In the 4-hour timeframe, gold formed a bullish candle, with a considerable shadow, signifying that buyers may be exhausted and might see a bearish correction in gold very soon. On the lower side, gold may find support at 1,847 and 1,839. Both the RSI and the MACD are overbought, and they also support the bearish correction. On the higher side, resistance is likely to be found at around the 1,867 and 1,887 levels today. Let’s watch for our forex trading signal on gold, as we wait for the right time to capture a retracement. Good luck!