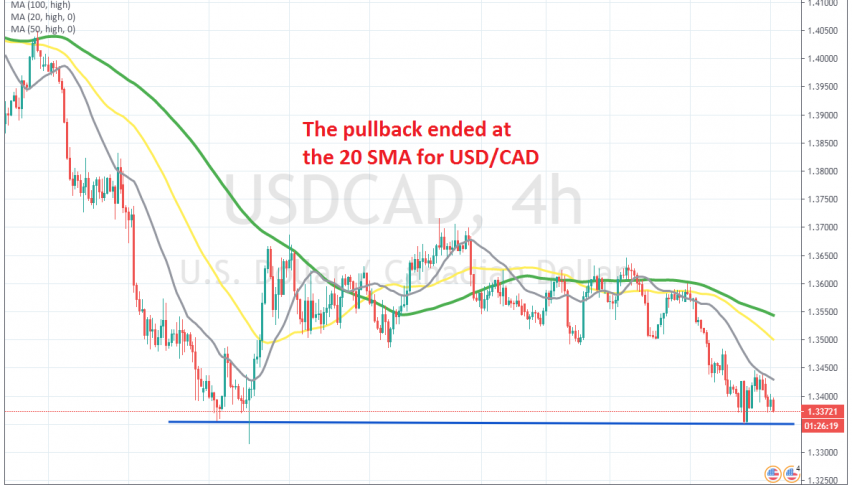 The bearish tend resumes again on the H4 chart

USD/CAD turned bearish since the middle of March, after it surged around 15 cents on surging USD as traders panicked, as well as from the falling Oil prices. But, the situation for the CAD improved eventually, especially since mid-April, when crude Oil stopped the crash and reversed higher, turning bullish since then, thus helping the CAD, since they are positively correlated.

The USD on the other hand, has turned massively bearish in recent months, as the election war continues. As a result, USD/CAD has been quite bearish since the middle of March, having lost around 14 cents from top to bottom. Last Thursday we saw another attempt at the bottom side, but the previous support at 1.3350 held.

The price bounced around 100 pips higher on Friday, but the 20 SMA (grey) turned into resistance on the H4 chart, as shown above. This also shows that the trend is quite strong, since smaller averages are providing resistance. The 20 SMA rejected the price, now USD/CAD has turned down again, heading for the previous support at 1.35. We will see if sellers will be able to break the support. If they do, then we might open a sell signal on the break, if not, then we might open a small lang position, hopping on a bounce, although we will try to get a reversing signal for that.

Safe-Havens Struggle To Open The Forex Week
7 hours ago