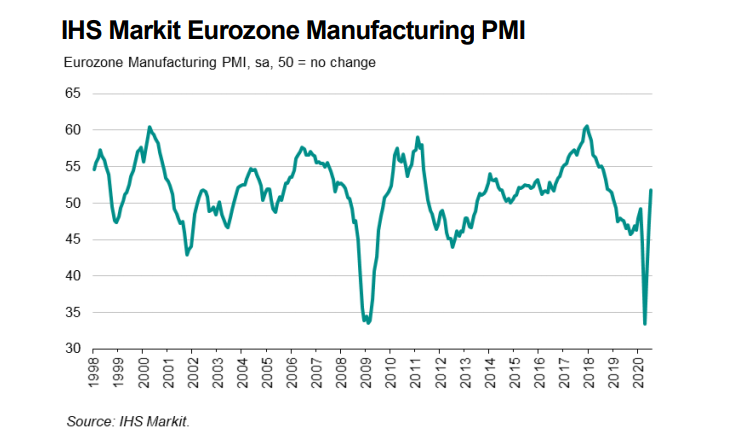 Services were the hardest hit sector all across the globe during the lock-down months, crashing to record lows. Although, manufacturing dived quite low as well, with output falling in the deepest contraction in history. But, at least it seems like manufacturing has left back copntraction now and is back into expansions, so that was the shortest recession ever for this sector. Below are the European final reading reports for July:

“Spain’s manufacturing sector finally returned to growth territory during July as the further re-opening of the economy helped to support an upswing in demand and drive higher orders from both domestic and international sources.

“However, there remains some way to go until we see a return to levels of activity recorded before the COVID-19 pandemic intensified, with the latest survey again showing falling backlogs of work and cuts to employment.

“Manufacturers are generally cautious in their view of how the rest of the year and the first half of 2021 will work out, with many expecting a steady recovery – but with notable downside risks given the clear potential for a resurgence in COVID-19 and the associated negative impact on overall economic activity.”

“Latest data point to an improving landscape for the Italian manufacturing sector, with operating conditions improving for the first time since mid-2018. Factory production rose again and at a quicker rate in July, amid the first uptick in new business for two years.

“Factories and production lines continue to operate below capacity and limit working hours, however, with manufacturing employment declining for the fourteenth month in a row as a result. Foreign demand also remained a source of weakness, with new export orders falling further.

“Overall, July data appear to suggest the sector is on it’s way to recovery, with output expectations also remaining positive. But, after such an extreme blow, there is masses of ground to make up. It is essential that demand conditions continue to improve, and any reintroduction of lockdown measures due to a “second wave” of the pandemic has the potential to derail the recovery.”

“French manufacturers saw another improvement in business conditions during July, which was predominantly supported by output growth, much like in June. However, the resurgence in activity has seemingly been driven by the unfreezing of previously existing orders, according to panellists’ comments. This suggests that the recovery in production could be a false dawn, with underlying demand yet to recover. New orders were little-changed for the second month running, and while June’s stabilisation could be viewed in a positive light, the latest reading represents an end to the upward trajectory in the index seen over the previous two months. Manufacturers’ clients are hesitant to place orders while they remain in recovery mode, which is a challenge the sector will have to overcome in order to achieve sustainable growth going forward.”

“The recovery of the German manufacturing sector remains on track, with the PMI improving further from April’s low and now finally in growth territory.

“The headline reading of 51.0 is the highest since December 2018, although it actually understates the strength of the rebounds in the underlying measures of output and new orders, with the PMI dampened by steep falls in both employment and stocks.

“The deep cuts to factory job numbers are a sign that activity and demand are still comfortably down on pre-crisis levels, and represent a key headwind to any recovery.

“Nevertheless, with new orders up sharply in July the immediate outlook for production looks positive, and the manufacturing sector remains on course to make a strong contribution to an expected technical rebound in the economy in the third quarter.”

“Eurozone factories reported a very positive start to the third quarter, with production growing at the fastest rate for over two years, fuelled by an encouraging surge in demand. Growth of new orders in fact outpaced production, hinting strongly that August should see further output gains. The order book improvement has also helped restore business confidence about the outlook in July to January’s pre-pandemic peak.

“The job numbers remain a major concern, however, especially as the labour market is likely to be key to determining the economy’s recovery path. Although the rate of job losses eased to the lowest since March, it remained greater than at any time since 2009, reflecting widespread cost-cutting in many firms where profits have been hit hard by the virus outbreak. Increased unemployment, job insecurity, second waves of virus infections and ongoing social distancing measures will inevitably restrain the recovery.

“The next few months numbers will therefore be allimportant in assessing whether the recent uplift in demand can be sustained, helping firms recover lost production and alleviating some of the need for further cost cutting going forward.”