Retail sales posted some major declines in May and April during the lock-down months, at -11.2% and -11.7% respectively. But, they posted a strong jump in May at 17.8% initially, which was revised higher to 20.3% today. For June, sales posted another increase of 5.7%, which in normal times is considered quite strong. But, we’re still in the rebound months.

So we’re seeing some large positive numbers, which I hope remain positive for months to come, but I don’t think they will be as strong as in the last two months. Below is the retail sales report for June:

Retail sales activity continues to pick up after bottoming out in April, with textiles, clothing and footwear contributing to the big beat once again. This could still be largely due to accumulated demand but regardless, is a lagging indicator since this pertains to Q2. 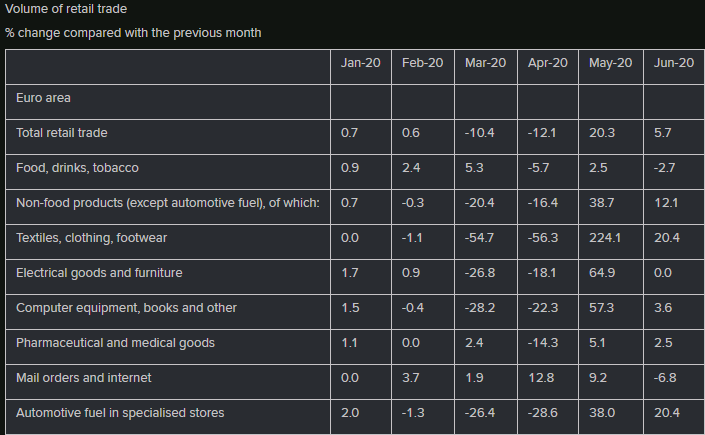 As I said above, it remains to be seen if consumption and spending can be sustained at such better levels in Q3/Q4, and that will again be subject to virus and labour market conditions in the region.

USD/JPY Flirting With the 50 SMA, As Safe Havens Decline
8 hours ago