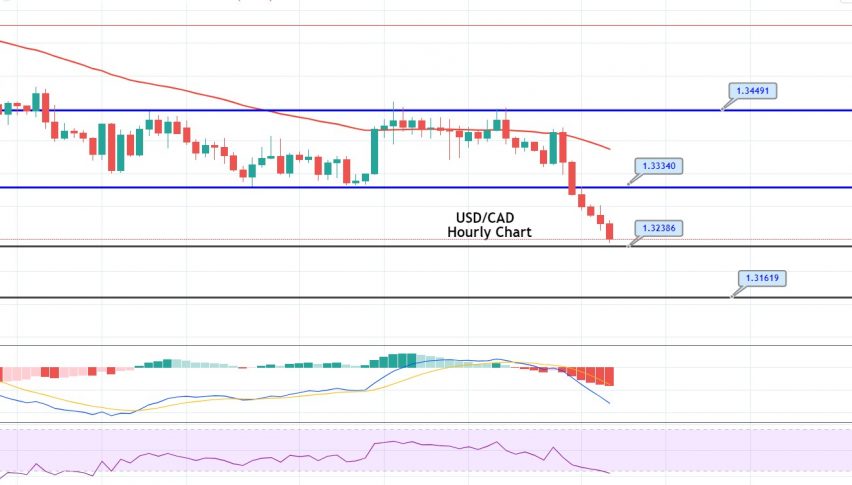 The USD/CAD pair closed at 1.33188, after placing a high of 1.34203 and a low of 1.33181. Overall, the movement of the USD/CAD pair remained bearish throughout the day. The USD/CAD currency pair extended its bearish streak for the 3rd consecutive day, amid the fresh weakness of the US dollar and the sudden rise in the WTI Crude Oil Prices.

The US dollar was under pressure on Tuesday, after the US Senate’s Democratic leader said that the parties in Congress were moving forward, in the right direction, but still were having differences in terms of preferences and scales.

This information regarding the new fiscal stimulus package by the US Congress, although the previous one had already expired on Friday, weighed on the US dollar, dragging the USD/CAD pair in a downward direction. The investors were keenly awaiting the new aid package from the US Congress, which would support to the US economy through the coronavirus crisis, and a positive hint in this regard gave the USD bears a push, weighing on the market sentiment.

Meanwhile, WTI Crude Oil prices rose above the $ 42 level on Tuesday, giving strength to the commodity-linked Loonie. The rise in crude oil was supported by the fall of the US dollar, as the two are inversely correlated. Another factor involved in the rise in crude oil prices was the banning of the TikTok app in the United States, by President Donald Trump, as this had intensified the US-China tensions.

However, the rise in crude oil led to the strengthening of the commodity-linked currency, Loonie, weighing on the USD/CAD pair on Tuesday.

On the data front, the Manufacturing PMI from Canada was released at 18:30 GMT, coming in at 52.9 for July, which represented an expansion in manufacturing activities. It also supported the Canadian Dollar, adding further to the losses for the USD/CAD on the day.

On the USD front, the Factory Orders in June increased to 6.2%, from the projected 5.1%, lending support to the US dollar and keeping a check on the ongoing losses of the USD/CAD pair. The Trade Balance from Canada, and the Non-Farm Employment Change and the ISM Non-Manufacturing PMI, will be released on Wednesday. They will be closely watched by USD/CAD-pair traders.

The USD/CAD is trading sharply bearish, at the 1.3260 level, especially after having violated the triple bottom support level of 1.3330. On the lower side, the USD/CAD may find its next support at the 1.3241 level. The recent formation of the three-black-crows pattern on the two-hourly timeframe also supports selling. The RSI and 50 EMA suggest a solid selling bias for the USD/CAD pair; therefore, we should consider taking a selling trade until the 1.3241 target level for now. Good luck!