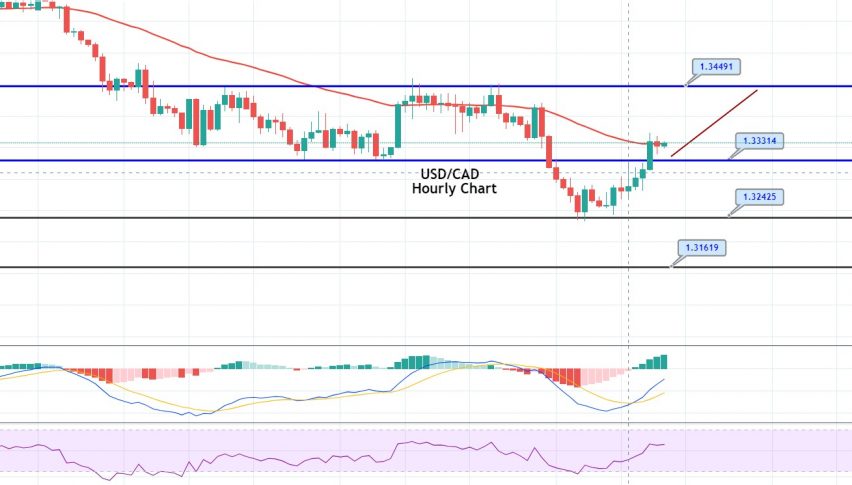 The USD/CAD currency pair succeeded in extending its recovery moves of the previous session, and hitting the session’s high at well above the 1.3400 level, mainly due to the strength of the broad-based US dollar, backed by the downbeat trading sentiment, ahead of the release of the US Advance Q2 GDP report. On the other hand, the gains for the currency pair could also be attributed to the weaker oil prices, which eventually undermined the demand for the commodity-linked currency, the Loonie, and contributed to the currency pair’s gains. Currently, the USD/CAD currency pair is trading at 1.3414 and consolidating in the range between 1.3332 and 1.3426. However, the traders seemed cautious about placing any strong positions ahead of the US Advance Q2 GDP report.

However, the worries over the second wave of the Covid-19 virus and uncertainty surrounding the US fiscal package, triggered by the differences between US Senate members, exerted bearish pressure on the risk sentiment. As per the latest report, the number of coronavirus infections has risen to more than 17 million worldwide, with 4.4 million cases and more than 150,000 deaths in the US alone, as per Johns Hopkins University data. In the meantime, China, South Korea, and Japan have also recorded a sharp rise in confirmed cases. It is worth mentioning that Japanese media reported that 365 new infections were recorded in Tokyo on Thursday. These concerns are keeping the investors on a slippery road, and they are exerting downside pressure on the market trading sentiment.

Besides the virus woes, the conflict between the US and China over Hong Kong security laws remained on the cards, as per the latest warning by Chinese Commerce Ministry Spokesman Gao Feng, against the challenges faced by the Dragon Nation regarding trade, due to the rising external uncertainties.

As a result, the broad-based US dollar has started to flash green, taking bids as investors turned to the safe-haven asset, mainly due to concerns over the US-China war and virus woes. However, the gains in the US dollar could be short-lived or temporary, due to the worries that the economic recovery in the US could be stopped, in the wake of the resurgence of coronavirus cases. Therefore, the gains in the US dollar kept the currency pair higher.

On the crude oil front, the WTI crude oil prices remained under selling pressure, even after the upbeat stockpiles report. However, the decline in crude oil could also be attributed to the concerns about worsened US-China relations and the intensifying resurgence of coronavirus cases, which fueled demand concerns. Thus, the pullback in oil prices undermined demand for the commodity-linked currency, the Loonie, and remained supportive of the recovery momentum of the USD/CAD pair.

The traders are keenly awaiting the US economic docket, which will release the NFP and Unemployment reports later today. A 10.5% unemployment rate and 1,530K Non-Farm Employment Change are expected, thus, a drive sharp movement is expected in both the USD and the CAD.

The USD/CAD has recovered from its losses, to a complete 61.8% Fibonacci retracement level of 1.3370. It recently crossed over the 50 periods EMA, suggesting odds of further bullish bias in the pair. The RSI is holding in a bullish zone, supporting the buying trend, but at the same time, the closing of a candle below 1.3373 (61.8% Fibo level) also suggests odds of selling in the market. For now, the commodity currency pair can extend selling below the 1.3375 level, to the 1.3319 and 1.3285 levels, so let’s consider selling trades today. Good luck!